The Court heard oral arguments today in Foster v. Humphrey regarding a challenge to a 1987 conviction and death sentence by an all-white Georgia jury based on  Batson v. Kentucky (1986) applying equal protection principles to peremptory challenges in jury selection.

A seemingly new issue on the case involved whether or not the United States Supreme Court should be hearing the case at all.  While the Court granted certiorari to the Georgia Supreme Court (as we discussed and as the petition requested), the problem is that the Georgia Supreme Court had denied review . . . . for reasons that are unclear.  Was it discretionary? Was that discretion bounded?  Did the Georgia Supreme Court's denial of review for lack of a meritorous claim constitute a decision on the merits?  And even more complexly, did the Georgia state courts have an adequate and independent state ground - - - res judicata - - - under Michigan v. Long (1983)?  (Beth Burton, the attorney for Georgia seemed to concede this was not the case.)  And to add yet another layer of complexity, even if the United States Supreme Court decided it should review the matter, what exactly should it review? As Chief Justice Roberts asked, "In other words, are we addressing just whether there's arguable merit to the claim or are we addressing the claim on its own merits?"

On the merits of the Batson claim, the problem arises from the "smoking gun" of prosecutorial notes singling out the Black potential jurors in the case.  Although Steve Bright, attorney for Foster suggested that there was "an arsenal of smoking guns" here, Justice Scalia suggested that Foster had to "establish [in order ] to reverse the Georgia courts is that the new smoking gun, assuming that all the rest were not enough to demonstrate a Batson violation ­­ the new smoking guns would tip the scale."  Justice Kagan seemed to see it differently, suggesting to Beth Burton, the Georgia Deputy Attorney, that this was a clear Batson violation:

You have a lot of new information here from these files that suggests that what the prosecutors were doing was looking at the African-­American prospective jurors as a group, that they had basically said, we don't want any of these people.  Here is the one we want if we really have to take one.  But that there ­­ all the evidence suggests a kind of singling out, which is the very antithesis of the Batson rule.

Justice Kennedy, perhaps the decisive vote, seemed convinced the prosecutors committed a Batson violation: "They've ­­ - - - they've made a mistake - - - ­­ they've made a mistake of - - -­­ in Batson."  But Justice Kennedy was also quite vocal in pressing the attorneys on the procedural issue, which could be an escape hatch for the Court in what could prove to be a difficult case. 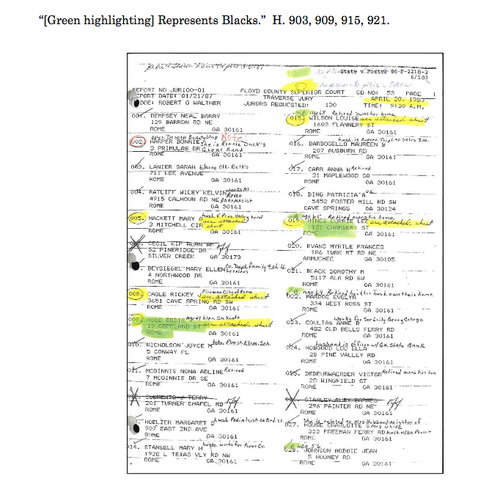