"Is that appropriate to wear in front of a jury? Why isn't that unfair to the commonwealth? You're asking me to ferret out jurors who are not fair ... I'm not going to allow clothing with that message." 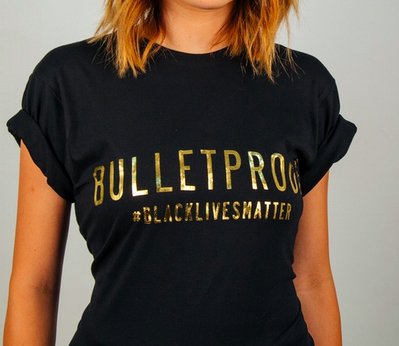 While judges have a great deal of discretion in the courtroom, the courtroom is not without First Amendment protections, even when it comes to the symbolic expression of attire.  However, most of the cases involving defendant attire have been about protecting the defendant's right to a fair trial rather than any right of the government's.  A quintet of cases from the United States Supreme Court - - - Illinois v. Allen (1973), Estelle v. Williams (1976), Holbrook v. Flynn (1986), Deck v. Missouri (2005), and Carey v. Musladin (2006) - - - considered various aspects of "attire" during trial.  In Allen, it was the possibility of the shackling and gagging the defendant,  in Williams it was the defendant's "prison garb," in Holbrook v. Flynn it was uniformed guards in the courtroom, in Deck it was shackling the defendant,  and in Musladin it was the defendant's objection to spectators' wearing buttons with the victim's photograph.

The rights of court spectators to First Amendment expressions is not well-established.  Justice Souter concurred in Musladin mentioning the possibility of such a right, but contended that trial judges had affirmative obligations to ensure a fair trial, including regulating the attire of spectators. But what if the spectators support the defendant?  Some judges have prohibited supportive attire.  For example, in 2013 an Indiana judge prohibited spectators from wearing buttons supporting Bei Bei Shuai, on trial for unsuccessful suicide attempt that resulted in a miscarriage.  And last year, a judge banned spectators from wearing pink hands pinned to their shirts in support of Cecily McMillan for assaulting a police officer who she said had grabbed her breast.

As to the defendants, they risk being held in contempt if they do wear the prohibited clothing.  Perhaps the most famous case involved the Chicago Eight conspiracy trial.

But the First Amendment principle is preserved whether or not the defendants comply with the judge's order about their expressive attire.  Prohibiting defendants from wearing non-obscene words that support their political viewpoints certainly raises a First Amendment issue of viewpoint and content discrimination.

[image via; video with defendant and shirt here]

But the message of the shirts in this case could be seen as testimony, albeit silent testimony, given that it relates to the subject of the prosecution. The court’s power to restrict the order and presentation of evidence and testimony as a “reasonable time, place and manner” regulation has never been doubted. If the defendants want to testify on their own behalf as to the nature of their cause, they can do so when they are called to the stand. Depending on the circumstance, if the nature of the cause is unrelated to the charge, then the testimony may be inadmissible as irrelevant and intended only to inflame the passions and prejudices of the jury. By analogy, if a defense attorney is not allowed to verbally inform the jury about the power of jury nullification, he could not hold up a sign telling them the same thing.