The central challenge was a Second Amendment one and the court applied the two-step inquiry that is becoming accepted throughout the circuits.

The first question is whether the government restriction burdens conduct protected by the Second Amendment: the Second Amendment protects only “the sorts of weapons” that are (1) “in common use” and (2) “typically possessed by law‐abiding citizens for lawful purposes.”

If so, the court then moves to the second inquiry, determining initially the "level of scrutiny" to be applied by considering two factors: (1) “how close the law comes to the core of the Second Amendment right” and (2) “the severity of the law’s burden on the right.”  After determining the level of scrutiny - - - here, intermediate scrutiny - - - the court then applies the standard asking "whether the statutes at issue are 'substantially related to the achievement of an important governmental interest.'"
Affirming the respective district judges, the Second Circuit upheld the constitutionality of state prohibitions on semiautomatic assault weapons and large‐capacity magazines.  The Second Circuit held that Connecticut's specific prohibition on the non‐ semiautomatic Remington 7615 and New York's "seven‐round load limit" violated the Second Amendment. 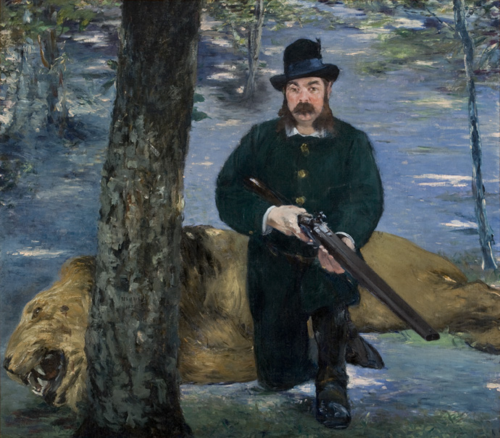 Manet, Mister Pertuiset, The Lion Hunter, 1881 via
The court also considered several due process vagueness challenges to specific provisions in the laws, reversing the conclusion of the New York federal district judge that certain provisions - - - pertaining to “versions” and “muzzle breaks”- - - were unconstitutionally vague.
The Second Circuit's opinion is closely reasoned and well within what is becoming the standard within all the circuits.  Although the opinion several times mentions the absence of clear United States Supreme Court precedent - - - reminding that neither District of Columbia v. Heller (2008) nor McDonald v. City of Chicago (2010) "delineated the precise scope of the Second Amendment or the standards by which lower courts should assess the constitutionality of firearms restrictions" - - - this should not be a case that the Second Circuit would be moved to reconsider or that the Supreme Court would find worthy of review - - - unless a ban on the possession of automatic assault weapons should be subject to strict scrutiny under the Second Amendment.

I still can’t get behind the incorporation of the Second Amendment against the States. While a lot of liberal focus has been on the “well regulated militia” aspect of the Amendment, arguably an indication that gun rights should be restricted to the various National Guards, equally important is the “necessary to the security of a free state” language. That text (with its emphasis on security rather than liberty) and historical analysis clearly indicate that the purpose of the Amendment was to protect the States against federal overreach, and not to protect the people of the States against their own local governments.