The en banc Sixth Circuit's opinion in Bible Believers v. Wayne County clearly rejected the existence of a "heckler's veto" to inflammatory but protected speech under the First Amendment's speech clause, as well as finding the speech protected under the Free Exercise Clause and the Equal Protection Clause of the Fourteenth Amendment.  The en banc court also found that the government was liable and that there was no qualified immunity.

Recall that last year a panel of the Sixth Circuit rejected the constitutional challenges of the Bible Believers group, affirming the district judge's grant of summary judgment for the government.

The underlying controversy arose when a group known as the "Bible Believers," Evangelical Christians, came to the Arab International festival on the streets of Dearborn, Michigan - - - as they had done the year before - - - to "preach."  Their speech included "strongly worded" slogans on signs, t-shirts, and banners (e.g., "Islam Is A Religion of Blood and Murder"),  a "severed pig's head 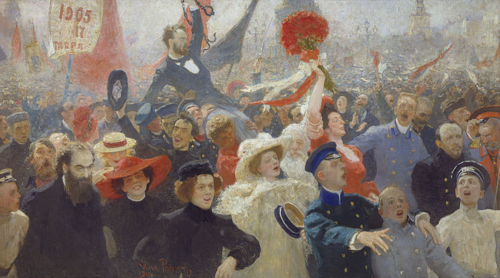 on a stick" (intended to protect the Bible Believers by repelling observers who feared it), statements through a megaphone castigating the following of a "pedophile prophet" and warning of "God's impending judgment."  A crowd gathered, seemingly mostly of children and adolescents, who yelled back and threw items at the preachers.  A law enforcement asked the Bible Believers to leave, and - when pressed - saying they would be cited for disorderly conduct. They were eventually escorted out.

The Sixth Circuit's extensive en banc opinion, authored by Judge Eric Clay - - - and in which 8 (including Clay) of the 15 Sixth Circuit judges joined - - - resolutely "confirms" the free speech protections that should be accorded to a speaker even when "angry, hostile, or violent crowds" seek to silence that speaker.

The opinion first finds that the Bible Believers' speech was protected, rejecting exception of incitement (to riot) and fighting words.  The "fighting words" discussion is regrettably short - - - a single paragraph - - - and summarily advances the "objective standard" requiring the insult to be likely to provoke the "average person" (emphasis in original) and moreover to be directed at an "individual."  In the context of the facts here, these principles deserved further exploration.

After a brief discussion of the public forum, the en banc opinion then discussed at length the "heckler's veto" doctrine and concluded it was not a viable doctrine.  Applying that conclusion, the opinion discussed law enforcement performance, citing the video record (which the court did at several points in the opinion): there was "next to no attempt made by the officers to protect the Bible Believers or prevent the lawless actions of the audience" and  it was not sufficient an effort "to maintain peace among a group of rowdy youths" - - - i.e., the crowd at the festival - - - if it consists of  a"few verbal warnings and a single arrest.  The court advised:

We do not presume to dictate to law enforcement precisely how it should maintain the public order. But in this case, there were a number of easily identifiable measures that could have been taken short of removing the speaker: e.g., increasing police presence in the immediate vicinity, as was requested; erecting a barricade for free speech, as was requested; arresting or threatening to arrest more of the law breakers, as was also requested; or allowing the Bible Believers to speak from the already constructed barricade to which they were eventually secluded prior to being ejected from the Festival. If none of these measures were feasible or had been deemed unlikely to prevail, the WCSO [Wayne County Sheriff's Office] officers could have called for backup—as they appear to have done when they decided to eject the Bible Believers from the Festival—prior to finding that it was necessary to infringe on the group’s First Amendment rights. We simply cannot accept Defendants’ position that they were compelled to abridge constitutional rights for the sake of public safety, when at the same time the lawless adolescents who caused the risk with their assaultive behavior were left unmolested.

In a very brief analysis, the court held that the free exercise claim "succeeds on the same basis as the free speech claim."  As for the Equal Protection Clause claim, the court's discussion is similarly summary, but its analysis seems much too conclusory:

The en banc court also held that the officers were not entitled to qualified immunity and that municipal liability was established.  On these issues, there were vigorous dissents.  And indeed, the en banc majority seems on tenuous ground, especially given its earlier discussion of Sixth Circuit precedent in Glasson v. City of Louisville decided in 1975:

In this Circuit, a modicum of confusion is understandable with respect to the prohibition against the heckler’s veto due to Glasson’s discussion of a good-faith affirmative defense.  . . . . Therefore, to the extent that Glasson’s good-faith defense may be interpreted as altering the substantive duties of a police officer not to effectuate a heckler’s veto, it is overruled.

Yet in the discussion of qualified immunity, the en banc court reasoned:

To the extent that Glasson’s discussion of a good-faith defense confused the issue of whether a heckler’s veto constitutes a constitutional violation, the facts and analysis in Glasson nonetheless alerted Defendants that removing a peaceful speaker, when the police have made no serious attempt to quell the lawless agitators, could subject them to liability.

That both the district judge and a previous panel of the Sixth Circuit had found that law enforcement's actions were constitutional, this seems a harsh conclusion - - - and is inconsistent with recent qualified immunity in First Amendment cases.  (For example, recall the unanimous Supreme Court 2014 opinion in Lane v. Franks, not cited in the Sixth Circuit opinions).

On the whole, the Sixth Circuit opinion validates the First Amendment right of provocative, offensive, and "challenging speech" - - - including symbolic speech such as marching with a pig's head on a stick - - - and requires law enforcement to protect such speech against (physically) hostile reactions by directing their efforts against those who are hostile rather than the speakers.   As Judge John Rogers, dissenting, suggested, one way to view the underlying controversy was that the "Bible Believers were hecklers seeking to disrupt the cultural fair" being held by the Arab-American community as an expressive enterprise.  The en banc majority clearly rejected that view - - - and held that the government should be liable for damages.