The 2015 Presidential Proclamation for Columbus Day includes an acknowledgement that the celebration of Columbus is controversial among many:

Though these early travels expanded the realm of European exploration, to many they also marked a time that forever changed the world for the indigenous peoples of North America. Previously unseen disease, devastation, and violence were introduced to their lives -- and as we pay tribute to the ways in which Columbus pursued ambitious goals -- we also recognize the suffering inflicted upon Native Americans and we recommit to strengthening tribal sovereignty and maintaining our strong ties.

As the Washington Post reports, many cities are replacing Columbus Day with Indigenous Peoples Day, including Seattle. The state of South Dakota legislated the day as "Native American Day" in 1990 - - - although no other state seems to have followed suit.  The day remains a federal holiday.

A lively commentary by James Nevius over at The Guardian calls Christopher Columbus a "lost sadist," but also interestingly argues that the holiday's "sentiments are superfluous," given the United States' development.  In a more scholarly vein, Kevin Bruyneel has argued that the holiday serves as a consolidation of white settler identity; his article, The Trouble with Amnesia: Collective Memory and Colonial Injustice in the United States, takes calendar holidays as its theme and is worth a read over at ssrn. 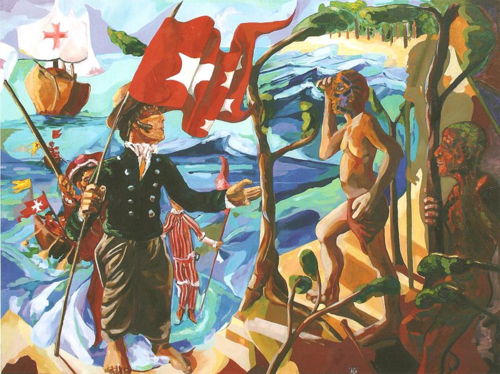