In its opinion in Parsons v. Department of Justice today, a panel of the Sixth Circuit reversed the district judge's dismissal of a complaint for lack of standing by individuals who identify as "Juggalos"  a group the FBI's National Gang Intelligence Center (NGIC) has identified as a "hybrid gang."  The individuals alleged that "they subsequently suffered violations of their First and Fifth Amendment constitutional rights at the hands of state and local law enforcement officers who were motivated to commit the injuries in question due to the identification of Juggalos as a criminal gang." 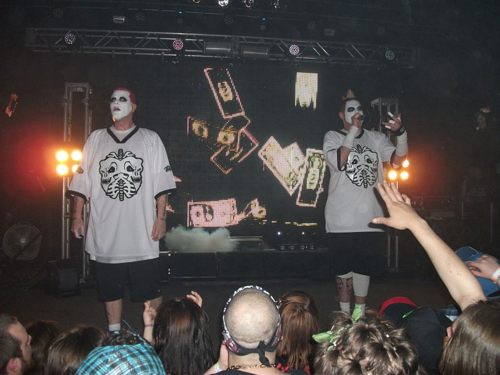 As the court explained, Juggalos are fans of Insane Clown Posse, a musical group, and its record label, Psychopathic Records, who often wear or display Insane Clown Posse tattoos or insignia, as well as paint their faces. The complaint alleged various actions by law enforcement, including detentions and inference with performances, as a result of the gang designation.

The court found that while their allegations of chilled expression were insufficient to rise to the requisite "injury in fact" required under standing doctrine,

The Juggalos’ allegations that their First Amendment rights are being chilled are accompanied by allegations of concrete reputational injuries resulting in allegedly improper stops, detentions, interrogations, searches, denial of employment, and interference with contractual relations. Stigmatization also constitutes an injury in fact for standing purposes.  As required, these reputational injuries are cognizable claims under First Amendment and due process causes of action.

[citations omitted].  Thus, the court held that the injury in fact requirement was satisfied as to the First Amendment and due process claims.

On the question of redressibility, the remedy sought included a finding that the gang report is invalid.  The court rejected the government's argument that such information about the Juggalos was available from other sources by stating that the test is not that the "harm be entirely redressed." "While we cannot be certain whether and how the declaration sought by the Juggalos will affect third-party law enforcement officers, it is reasonable to assume a likelihood that the injury would be partially redressed where, as here, the Juggalos have alleged that the law enforcement officers violated their rights because of" the government report.  The court seemingly found it pertinent that the DOJ's report gave the gang designation an impressive "imprimatur" of government authority.

As the Sixth Circuit made clear, the complaint remains subject to the motion to dismiss on other grounds, but this is an important victory for the Juggalo quest to remove its gang-identification.