Affirming the district judge's denial of a preliminary injunction, the Ninth Circuit's opinion in International Franchise Ass'n v. City of Seattle rejected all of the constitutional challenges to a Seattle provision that deemed franchises included in the definition of "large employers" and thus subject to the new $15 minimum wage.  Recall that the complaint challenged  the provision under the (dormant) commerce clause, equal protection clauses of the Fourteenth Amendment, the First Amendment, preemption under the Lanham Act (trademarks), and state constitutional provisions. 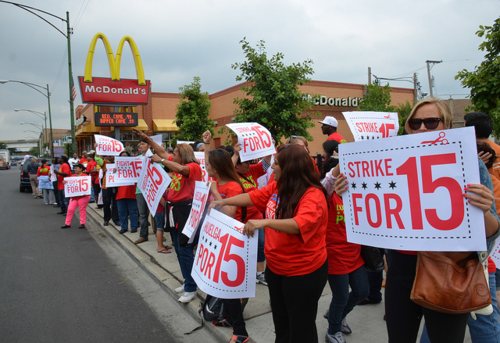 Photo by Steve Rhodes via

The unanimous Ninth Circuit panel's opinion found that there was not a likelihood of success on any of the constitutional claims, devoting most of its analysis to dormant commerce clause doctrine.  The panel first rejected the argument that the franchise regulation expressly discriminated against franchises as interstate commerce and was thus not "facially neutral." The panel also rejected the argument that the Seattle provision had a discriminatory purpose, noting that while there was some evidence that some persons involved in considering the issue were critical of franchise employment practices, even the strongest evidence of this (in an email), did not show that even this person "intended to burden out-of-state firms or interfere with the wheels of interstate commerce," and "[m]ore importantly, they also do not show that City officials wished to discriminate against out-of- state entities, bolster in-state firms, or burden interstate commerce."  Lastly, the panel rejected the argument that the Seattle provision discriminatory effects, agreeing with the district judge that the United States Supreme Court's decisions on dormant commerce clause can be "difficult to reconcile" and noting:

We lack Supreme Court authority assessing whether a regulation affecting franchises ipso facto has the effect of discriminating against interstate commerce. Nor has the Supreme Court addressed whether franchises are instrumentalities of interstate commerce that cannot be subjected to disparate regulatory burdens. While regulations that expressly classify based on business structure or impose disparate burdens on franchises present interesting questions, our review is limited to considering whether the district court applied improper legal principles or clearly erred in reviewing the record.

The footnote to this paragraph includes an extensive citation to lower courts that have considered the issue of whether measures that affect national chains violate the dormant Commerce Clause.  The Ninth Circuit panel concluded:

[T]he evidence that the ordinance will burden interstate commerce is not substantial. It does not show that interstate firms will be excluded from the market, earn less revenue or profit, lose customers, or close or reduce stores. Nor does it show that new franchisees will not enter the market or that franchisors will suffer adverse effects.

The Ninth Circuit panel dispatched the Equal Protection Clause claim much more expeditiously.  The Ninth Circuit applied the lowest form of rational basis scrutiny  - - - citing F.C.C. v. Beach Commc’ns, Inc. (1993) sometimes called "anything goes" rational basis - - - and finding there was a legitimate purpose (without animus) and the law was reasonably related to that purpose.

The court's discussion of the First Amendment claim was similarly brief, not surprising given that the court found the Speech Clause's threshold requirement of "speech"  was absent: "Seattle’s minimum wage ordinance is plainly an economic regulation that does not target speech or expressive conduct."

Additionally, the court agreed with the district judge that there was no preemption under the Lanham Act and no violation of the Washington State Constitution.

The Ninth Circuit panel did disagree with the district judge regarding some minor aspects of the non-likelihood to prevail on the merits preliminary injunction factors.  But on the whole, the opinion is a strong rebuke to the constitutional challenges to the Seattle laws.

Given the stakes (and the attorneys for the franchisers) a petition for certiorari is a distinct possibility.  Meanwhile, as we suggested when the case was filed, for ConLawProfs looking for a good exam review or exam problem, International Franchise Ass'n v. Seattle has much potential.