In an opinion that essentially extends religious protections to a nonreligious organization, Judge Richard Leon has ruled in March for Life v. Burwell that the so-called contraceptive mandate in the Patient Protection and Affordable Care Act (ACA or "Obamacare") cannot constitutionally be applied to a nonprofit anti-abortion employer.  While portions of Judge Leon's opinion predictably relied upon the Supreme Court's closely divided 2014 decision in Burwell v. Hobby Lobby, Inc. under the Religious Freedom Restoration Act (RFRA), Judge Leon notably found that the contraception mandate's exclusion of religious organizations - - - but not other organizations - - - violated the equal protection component of the Fifth Amendment.

Were defendants to have their way here, rational basis review would have all the bite of a rubber stamp!

Defendants contend that March for Life is not “similarly situated” to the exempted organizations because it “is not religious and is not a church.” Rational basis review is met, they argue, because the purpose served, “accommodating religious exercise by religious institutions,” is “permissible and legitimate.”  This not only oversimpliﬁes the issue—it misses the point entirely! The threshold question is not whether March for Life is “generally” similar to churches and their integrated auxiliaries. It is whether March for Life is similarly situated with regard to the precise attribute selected for accommodation.  For the following reasons, I conclude that it most assuredly is. 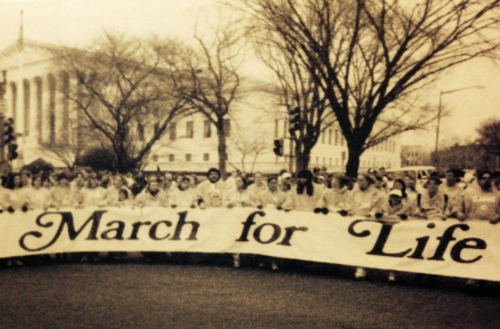 image via "March for Life" about us

HHS has chosen to protect a class of individuals that, it believes, are less likely than other individuals to avail themselves of contraceptives. It has  consequently moored this accommodation not in the language of conscientious objection,  but in the vernacular of religious protection. This, of course, is puzzling. In HHS’s own  view, it is not the belief or non-belief in God that warrants safe harbor from the Mandate.  The characteristic that warrants protection——an employment relationship based in part on a shared objection to abortifacients—is altogether separate from theism. Stated  differently, what HHS claims to be protecting is religious beliefs, when it actually is  protecting a moral philosophy about the sanctity of human life. HHS may be correct that  this objection is common among religiously-affiliated employers. Where HHS has erred,  however, is in assuming that this trait is unique to such organizations. It is not.

In other words, the HHS's rationale - - - the government interest - - - was not specifically religious and thus should not be limited to religious organizations in keeping with principles of equal protection.  Some of this reasoning is reminiscent of Hobby Lobby, of course, but there the level of scrutiny under RFRA was strict (or perhaps even stricter than strict) scrutiny, while Judge Leon is applying rational basis scrutiny.

Interestingly, Judge Leon states that  "'religion' is not a talisman that sweeps aside all constitutional concerns," and quotes the classic conscientious objector case of Welsh v. United States (1970) for the "long recognized" principle that  “[i]f an individual deeply and sincerely holds beliefs that are purely ethical or moral in source and content . . . those beliefs certainly occupy in the life of that individual a place parallel to that filled by God in traditionally religious persons.”  Taken to its logical conclusion, this reasoning has the potential to eliminate - - - or at least ameliorate - - - the "special" protection of religious freedom.

In his application of RFRA, Judge Leon's opinion is on more well-plowed ground.  He notes that while "March for Life is avowedly non—religious, the employee plaintiffs do oppose the Mandate on religious grounds."  This brings the case within the purview of Hobby Lobby.  As Judge Leon phrases it:

The ﬁnal question the Court must ask under RFRA is whether the current Mandate is the least restrictive means of serving this governmental interest. Assuredly, it is not!

While Judge Leon dismissed the free exercise claim,  based upon the DC Circuit's opinion and denial of en banc review in Priests for Life v HHS, the judge granted summary judgment in favor of plaintiffs on the Equal Protection and RFRA claims (as well as a claim under the Administrative Procedure Act).

When this case reaches the DC Circuit, it will be interesting to see how the court - - - as well as religious organizations and scholars - - - views Judge Leon's potentially destabilizing equal protection analysis.