It's Constitution Day - September 17 - and federal law mandates that 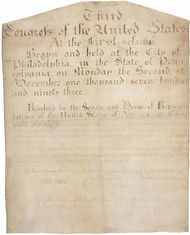 Department of Education regulations provide that the law

In President Obama's proclamation this year, he states:

On this day and throughout this week, let us honor the values for which the Framers stood by rededicating ourselves to carrying forward the spirit first embodied in their achievements -- that what makes our country great is not that we are perfect, but that we can face our imperfections and decide that it is in our power to remake our Nation to more closely align with our highest ideals.  With time, courage, and the participation of our citizenry, we can pay tribute to those who shaped the land we love today while working to secure everlasting peace, prosperity, and opportunity for all who call America home.

It's quite possible that Constitution Day is itself unconstitutional. One of the classic discussions is from ConLawProf Kent Greenfield in 2005 where he argues:

The right to be free of government-compelled speech - even speech that is worthwhile and beneficial - has been a "fixed star in our constitutional constellation" for over sixty years. That quote comes from Justice Robert Jackson, writing for the Supreme Court striking down a law expelling students who refused to recite the Pledge of Allegiance. Even though the country was in the middle of World War II at the time, the Court recognized that patriotism must be voluntary to be meaningful. Jackson did not mince words: "Those who begin coercive elimination of dissent soon find themselves exterminating dissenters."

The same is true now. Though we are at war, if we have to mandate patriotism or respect for the constitution, then we have already lost.

And whether it is September 17 that should be "Constitution Day" is also subject to critique.  LawProf Colin Starger and others argue that the commemorative day should be February 3:

On that date in 1870, our nation ratified the last of the Civil War Amendments. That date symbolizes our commitment to reconstruct the Founders’ immoral compromise and place under national protection the inalienable rights of all the nation’s people.