In its opinion on rehearing, a divided panel of the DC Circuit in National Association of Manufacturers v. Securities and Exchange Comm'n has held that 15 U.S.C. § 78m(p)(1)(A)(ii) & (E), part of the Dodd-Frank Wall Street Reform and Consumer Protection Act, requiring a company to disclose if its products were not "DRC conflict free" violated the First Amendment. 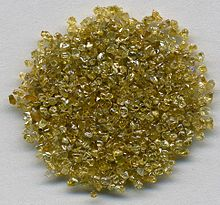 Rough diamonds from DRC via

In its previous decision more than a year ago in National Association of Manufacturers (NAM),  a majority of the same panel, in an opinion authored by Senior Judge Raymond Randolph and joined by Senior Judge David Sentelle, found the conflict mineral disclosure was a First Amendment violation.  In that 2014 opinion, Judge Srinivasan dissented on the First Amendment issue and contended that this opinion should be held in abeyance "pending the en banc court’s decision" in American Meat Institute v. United States Dep't of Agriculture, regarding a  First Amendment challenge to requiring country of origin labeling (COOL) of meat and meat products.  In the DC Circuit's en banc opinion a year ago, a divided court upheld the constitutionality of the COOL requirements.  The rehearing of the conflict minerals disclosure was prompted by that intervening en banc decision in American Meat Institute (AMI).  The panel majority essentially concluded that its mind was not changed by en banc opinion. [Neither of the senior judges in the panel majority participated in the en banc opinion in AMI].

Central to the controversies in both NAM and AMI is a choice of precedent: should the constitutionality of the labeling requirements be analyzed under  Zauderer v. Office of Disciplinary Counsel  or under the more demanding standard of Central Hudson v. Gas & Electric Corp. v. Public Service Commission of New York.  The DC Circuit's divided en banc opinion in AMI found that Zauderer should be applied.  In this rehearing in NAM, the panel majority (again) found that Zauderer had no applicability, but, as the opinion states, "for a different reason."  However, in sum this panel majority found that Zauderer is limited to "advertisements" at point of sale and seemed to contradict AMI.

The panel majority did "hedge its bets":

But given the flux and uncertainty of the First Amendment doctrine of commercial speech,15 and the conflict in the circuits regarding the reach of Zauderer,  we think it prudent to add an alternative ground for our decision. It is this. Even if the compelled disclosures here are commercial speech and even if AMI’s view of Zauderer governed the analysis, we still believe that the statute and the regulations violate the First Amendment.

In applying Central Hudson, the panel majority found that the disclosure of conflict minerals has a merely speculative relationship to addressing the interest of the government in ameliorating conflict in the Democratic Republic of the Congo as a source of such minerals.  Instead, the disclosure is akin to political propaganda.  The majority interestingly cites George Orwell's Nineteen Eighty-Four for its passages regarding government redefinition ("WAR IS PEACE"), and concludes that the disclosure is not only not factual but also controversial: it compels "an issuer to confess blood on its hands."

In dissent, Judge Srinivasan argues that any Scarlet Letter comparison is inapt: "requiring a company to disclose product information in the commercial marketplace is not the same as requiring Hester Prynne to “show [her] scarlet letter in the [town] market- place.”  He asserts that the majority is misreading Zauderer and that the en banc opinion in AMI controls.  Interestingly, he also contends that to the extent the court is requiring "proof" that disclosure of conflict minerals be linked to amelioration of the DRC conflict, the court should be deferring to executive judgments in this commercial context at least as much as the Court did in the political speech context involved in Holder v. Humanitarian Law Project.

It seems likely that government attorneys are preparing its en banc petition.