(b) obtains records of an agricultural production facility by force, threat, misrepresentation or trespass;

(c) obtains employment with an agricultural production facility by force, threat, or misrepresentation with the intent to cause economic or other injury to the facility's operations . . .

(d) Enters an agricultural production facility that is not open to the public and, without the facility owner's express consent or pursuant to judicial

process or statutory authorization, makes audio or video recordings of the conduct of an agricultural production facility's operations; or

Chief Judge Winmill described the legislative history including statements that compared animal rights investigators to “marauding invaders centuries ago who swarmed into foreign territory and destroyed crops to starve foes into submission.”  However, for Winmill, there is a better comparison: 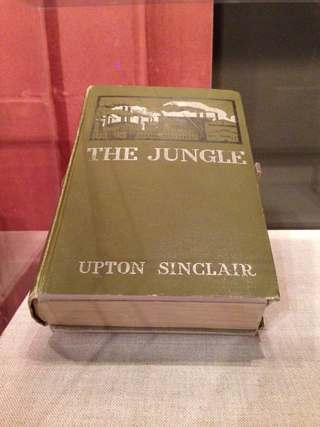 The story of Upton Sinclair provides a clear illustration of how the First Amendment is implicated by the statute. Sinclair, in order to gather material for his novel, The Jungle, misrepresented his identity so he could get a job at a meat-packing plant in Chicago. William A. Bloodworth, Jr., UPTON SINCLAIR 45–48 (1977). Sinclair’s novel, a devastating exposé of the meat-packing industry that revealed the intolerable labor conditions and unsanitary working conditions in the Chicago stockyards in the early 20th century, “sparked an uproar” and led to the passage of the Federal Meat Inspection Act, as well as the Pure Food and Drug Act. National Meat Ass'n v. Harris, 132 S.Ct. 965 (2012). Today, however, Upton Sinclair’s conduct would expose him to criminal prosecution under § 18-7042.

On the First Amendment challenge, the judge found that Idaho's ag-gag statute is content based and merits strict scrutiny.  The opinion revisits an earlier ruling so concluding to reiterate that the United States Supreme Court's opinion in United States v. Alvarez ("the stolen valor case").  Judge Winmill notes that any deception involved in the ag-gag violation would be not be harmful: "the most likely harm that would stem from an undercover investigator using deception to gain access to an agricultural facility would arise, say, from the publication of a story about the facility, and not the misrepresentations made to gain access to the facility."  And "harm caused by the publication of true story is not the type of direct material harm that Alvarez contemplates."  The judge also held that the recording provision is content-based.

Moreover, Judge Winmill implicitly determines that the law is viewpoint-based:

a review of § 18-7042’s legislative history leads to the inevitable conclusion that the law’s primary purpose is to protect agricultural facility owners by, in effect, suppressing speech critical of animal-agriculture practices.

Not surprisingly, the statute does not survive strict scrutiny.  The judge is skeptical that the "property and privacy interests of agricultural production facilities" are sufficiently compelling given that food production is a heavily regulated industry.  Even if the interests were compelling, however, the statute was not narrowly tailored:

Criminal and civil laws already exist that adequately protect those interests without impinging on free-speech rights. It is already illegal to steal documents or to trespass on private property. In addition, laws against fraud and defamation already exist to protect against false statements made to injure or malign an agricultural production facility.

The judge thus concludes that the law restricts more speech than is necessary to achieve its goals.

On the Equal Protection Clause issue, the court's conclusion does not depend on a strict scrutiny analysis.  The judge finds that the ag-gag statute cannot satisfy even rational basis review.  First, Judge Winmill finds that that state's purported interest is not legitimate:

The State argues that agricultural production facilities deserve more protection because agriculture plays such a central role in Idaho’s economy and culture and because animal production facilities are more often targets of undercover investigations. The State’s logic is perverse—in essence the State says that (1) powerful industries deserve more government protection than smaller industries, and (2) the more attention and criticism an industry draws, the more the government should protect that industry from negative publicity or other harms. Protecting the private interests of a powerful industry, which produces the public’s food supply, against public scrutiny is not a legitimate government interest.

Second, the judge finds that the actual interest is a “a bare congressional desire to harm a politically unpopular group" and thus  "cannot constitute a legitimate governmental interest if equal protection of the laws is to mean anything,” quoting and relying on U. S. Dept. of Agriculture v. Moreno (1973).  "As a result, a purpose to discriminate and silence animal welfare groups in an effort to protect a powerful industry cannot justify the passage" of the statute.

Judge Winmill's decision is ground-breaking.  So-called "ag-gag" laws have proliferated and are being challenged, usually on First Amendment grounds.  Undoubtedly the state will appeal and the Ninth Circuit will have a chance to decide whether  Judge Winmill was correct that the Idaho law is similar to the day labor solicitation prohibition in Arizona's SB1070 that the Ninth Circuit held unconstitutional in Valle Del Sol Inc. v.Whiting.

UPDATE: Check out this analysis by ConLawProf Shaakirrah Sanders over at casetext and her pre-decision discussion about the case with Idaho Public Radio.