In its substantial opinion in Hodge v. Talkin, a panel of the United States Court of Appeals for the DC Circuit upheld the constitutionality of statutory prohibitions of assembly and display of flags or signs on the United States Supreme Court plaza. 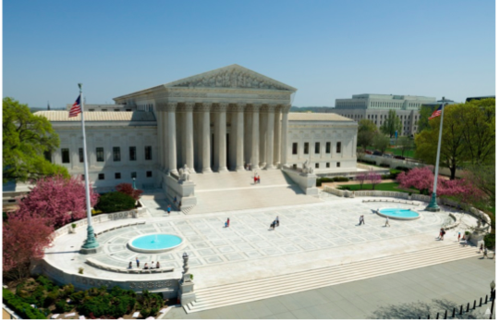 image of SCOTUS Building included in the opinion

Recall that almost two years ago, district judge Beryl Howell had found the statute unconstitutional in a well-reasoned and extensive opinion.  Judge Howell's ruling prompted the United States Supreme Court to swiftly respond by promulgating a new regulation that seemingly responded to at least some of the more problematical examples that Judge Howell identified such as preschoolers wearing a tee-shirt.  However, the DC Circuit's opinion reverses Judge Howell's decision without reliance on the limitations in the new policy.

Writing for a unanimous panel, Judge Sri Srinivasan notes that the United States Supreme Court's decision in United States v. Grace (1983) left the constitutional status of the plaza, when it decided that the sidewalks surrounding the perimeter of the Supreme Court building are public forums. However, Srinivasan relies on Grace for the distinction between the plaza and the sidewalks to conclude that the plaza is a nonpublic forum:

In marked contrast to the perimeter sidewalks considered in Grace, the Supreme Court plaza distinctively “indicate[s] to the public”—by its materials, design, and demarcation from the surrounding area—that it is very much a “part of the Supreme Court grounds.” [Grace.; Id. at 183.].  The plaza has been described as the opening stage of “a carefully choreographed, climbing path that ultimately ends at the courtroom itself.” Statement Concerning the Supreme Court’s Front Entrance, 2009 J. Sup. Ct. U.S. 831, 831 (2010) (Breyer, J.). For that reason, the Court’s plaza—unlike the surrounding public sidewalks, but like the courthouse it fronts—is a “nonpublic forum,” an area not traditionally kept open for expressive activity by the public. The government retains substantially greater leeway to limit expressive conduct in such an area and to preserve the property for its intended purposes: here, as the actual and symbolic entryway to the nation’s highest court and the judicial business conducted within it.

The opinion devotes attention to architectural description, which it admits in one case has "perhaps" a "degree of romanticism," and also likens the public forum characterization of the Supreme Court plaza to "the treatment of courthouses more generally" and to the controversial Lincoln Center plaza case; interestingly now-Justice Sotomayor was a judge on that panel.

As a nonpublic forum subject to the "lenient" First Amendment standard of reasonableness, the DC Circuit has little difficult in finding that the statute is "reasonable."  Interestingly, the United States Supreme Court's closely divided opinion last Term in Williams-Yulee v. The Florida Bar occupies a prominent role in this reasoning.  The opinion is discussed numerous times to support a conclusion that the government interests put forward here - - -  "the decorum and order befitting courthouses generally and the nation’s highest court in particular" and "the appearance and actuality of a Court whose deliberations are immune to public opinion and invulnerable to public pressure" - - - are both valid and being appropriately served.  Essentially, the DC Circuit's opinion embraces the "judiciary is special" sentiment and correctly notes that this prevailed in the strict scrutiny context of Williams-Yulee, so should suffice under the reasonableness standard.

The DC Circuit's opinion similarly rejects the overbreadth and vagueness arguments that the statute is unconstitutional.

In essence, the DC Circuit finds the inclusion of the "grounds" in the statute as a place where assembly or "display" of opinion can be prohibited is appropriate line-drawing:

In the end, unless demonstrations are to be freely allowed inside the Supreme Court building itself, a line must be drawn somewhere along the route from the street to the Court’s front entrance. But where? At the front doors themselves? At the edge of the portico? At the bottom of the stairs ascending from the plaza to the portico? Or perhaps somewhere in the middle of the plaza? Among the options, it is fully reasonable for that line to be fixed at the point one leaves the concrete public sidewalk and enters the marble steps to the Court’s plaza, where the “physical and symbolic pathway to [the] chamber begins.” [citation to architectural work]

While the odds are increasingly low that the United States Supreme Court will accept any case on certiorari, the odds seem to approach nil that the Court will exercise its discretion to review this opinion.