After the United States Supreme Court's opinion in Obergefell v. Hodges on June 26 declaring that states are required by the Fourteenth Amendment to issue same-sex marriage licenses, a few state officials have not only voiced objections to the decision, but have voiced resistance to complying with the Court's declaration.

The situations in Alabama and Texas have been the most contentious. 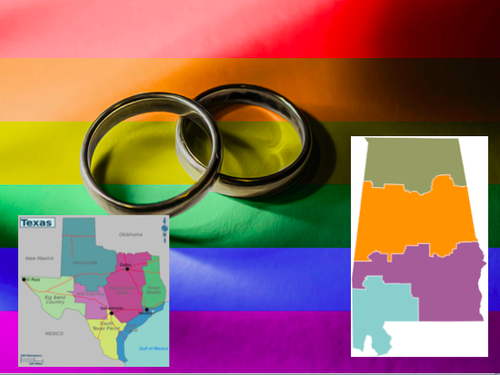 ALABAMA:     Recall that earlier this year when federal District Judge Callie V.S. Granade entered an injunction against the enforcement of the state's constitutional amendment and statutes banning same-sex marriage, the reaction of  Alabama Supreme Court's controversial Chief Judge Roy Moore was an unusual letter to the Governor objecting to the federal judge's opinion on the basis that federal courts have no power in this Biblical area.  This was followed by an opinion of the Alabama Supreme Court ordering judges not to issue same-sex marriage licenses. The Eleventh Circuit, and then the United States Supreme Court denied a stay of the district judge's opinion.

When the Court took certiorari in Obergefell, however, Judge Granade stayed her order.

However, after the Court decided Obergefell, the Alabama Supreme Court's  "corrected order" stated that because the US Supreme Court rules allow parties 25 days to file a petition for rehearing, the parties in the case - - - including two conservative Alabama organizations - - - were invited to submit briefs on the effect of Obergefell.  Federal District Judge Callie Granade issued a one-page Order on July 1, referenced her earlier stay and then stated:

The United States Supreme Court issued its ruling on June 26, 2015. Obergefell v. Hodges, 576 U.S. ____ (2015). Accordingly, by the language set forth in the [previous] order, the preliminary injunction is now in effect and binding on all members of the Defendant Class.

Thus, the officials of Alabama are subject to a direct order by a federal judge.

TEXAS:   The Attorney General of Texas, Ken Paxton, who is reportedly facing criminal charges on unrelated matters, issued a six page opinion letter a few days after Obergefell which stressed the individual religious rights of county clerks and their employees, as well as justices of the peace and clergy, regarding their participation in same-sex marriages.  Paxton's opinion was widely reported and concluded that county clerks retain religious freedoms that "may allow" accommodations depending "on the particular facts of each case."  Paxton relied on the First Amendment as well as Texas's Religious Freedom Restoration Act (RFRA), essentially similar to the federal RFRA at issue in the Court's decision in Hobby Lobby. This is not unique:  the possibility of claims by individual public employees in clerk's offices was also raised after New York passed its Marriage Equality Act in 2011 and as that act made clear - - - as is generally understood - - - that religious officers have complete discretion in agreeing or refusing to solemnize marriages.

The Fifth Circuit issued a very brief opinion on July 1, noting that "both sides now agree" that the  the injunction appealed from, originally issued in early 2014 by federal district judge Orlando Garcia in DeLeon v. Perry [now Abbott],  "is correct in light of Obergefell," the Fifth Circuit ruled that the preliminary injunction is affirmed.

The Fifth Circuit's opinion makes clear - - - seemingly with state agreement - - - that Texas is bound by Obergefell, but does not mention individual religious accommodations.

In both the Alabama and Texas situations, there are echoes of resistance to the Supreme Court's opinion in Brown v. Board of Education; The Supremacy Clause and the Court's opinion in Cooper v. Aaron seem to answer the question of whether state officials simply may disagree with the Court's interpretation of the Constitution.  This is true despite the dissenting opinions in Obergefell itself which argued that the Court should leave the resolution of same-sex marriage to individual states.  The question of religious accommodations may be a closer one, but what seems clear is that if there is indeed an individual right to be accommodated - - - again, that itself is unclear - - - it cannot be a right of a government entity.  While Hobby Lobby may have held that corporations have religious freedoms, it is hard to conceive of government entities having free exercise rights in a manner that does not violate the Establishment Clause.