The Court today issued its closely divided opinion in Kerry v. Din.  On this 800th anniversary of Magna Carta, both the plurality opinion by Justice Scalia and the dissenting opinion by Justice Breyer referenced the great charter's protection of what the Constitution's Fifth Amendment termed "due process of law." In Din, the due process rights of a citizen who obtained preferred immigration status for her spouse are at stake. Certainly the case is important in the immigration context, but how important might it be as a harbinger of the Court's impending decision in the consolidated same-sex marriage cases, Obergefell v. Hodges, argued in late April?  What Kerry v. Din might say about Obergefell is discussed here. 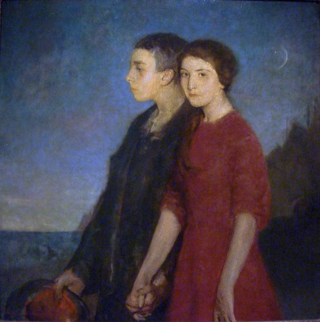 Charles Hawthorne, "Young man and woman in a dark, moody landscape," 1915, via

In Kerry v. Din, a naturalized citizen, petitioned to have her husband, Berashk, classified as an “immediate relative” entitled to priority immigration status, and although this was approved, Berashk’s visa application was denied under §1182(a)(3)(B), which excludes aliens who have engaged in “[t]errorist activities,” but the consular officer provided no further information. Unable to obtain a more detailed explanation for Berashk’s visa denial, Din filed a complaint in federal court which was dismissed.  The Ninth Circuit reversed, holding that Din had a protected liberty interest in her marriage that entitled her to review of the denial of Berashk’s visa. It further held that the Government deprived her of that liberty interest without due process when it denied Berashk’s visa application without providing a more detailed explanation of its reasons.

In the plurality opinion joined by Chief Justice Roberts and Justice Thomas, Justice Scalia has harsh words for Din's claim of any right of "life, liberty, or property" to which due process would attach.  It is "absurd" and nothing in the caselaw "establishes a free-floating and categorical liberty interest in marriage (or any other formulation Din offers) sufficient to trigger constitutional protection."  He characterizes her right as one to live in the United States with one's spouse, and concludes that such a right fails the Washington v. Glucksberg test requiring that any implicit right be "deeply rooted in this Nation's history and tradition."  Indeed, he argues that the history is exactly the opposite and discusses laws that mandated women "take the nationality of her husband on marriage."  While noting that modern " equal-protection doctrine casts substantial doubt on the permissibility of such asymmetric treatment of women citizens in the immigration context, and modern moral judgment rejects the premises of such a legal order," nevertheless, he concludes that "this all-too-recent practice repudiates any contention that Din’s asserted liberty interest is 'deeply rooted in this Nation’s history and tradition, and implicit in the concept of ordered liberty.'"

Justice Kennedy, joined by Justice Alito, firmly rejects Justice Scalia's conclusion: "Today’s disposition should not be interpreted as deciding whether a citizen has a protected liberty interest in the visa application of her alien spouse." Instead, Kennedy concludes that the "Court need not decide that issue," for "even assuming she has such an interest, the Government satisfied due process when it notified Din’s husband that his visa was denied under the immigration statute's terrorism bar."  For Kennedy and Alito, the citation of the statute seemingly satisfies all the process that is due.

Dissenting, Justice Breyer, joined by Justices Ginsburg, Sotomayor, and Kagan, argues that there is a liberty interest flowing from the Due Process Clause itself and from the statutory scheme establishing immigration preferences.  In his critique of the plurality opinion, Breyer reminds readers that it "is not controlling."  He discusses a number of cases in which the Court has recognized liberty interests, perhaps most compellingly Goss v. Lopez (1975), involving students' interest in attending school and not being suspended, and which the plurality opinion seeks to distinguish. Regarding the "process due," Breyer notes that a statement of the reasons for a government action is an essential part of due process and one that a recitation of the statute in this case cannot satisfy given that it contains "dozens" of reasons.  Moreover, the government offered no factual basis. He argues:

The generality of the statutory provision cited and the lack of factual support mean that here, the reason given is analogous to telling a criminal defendant only that he is accused of “breaking the law”; telling a property owner only that he cannot build because environmental rules forbid it; or telling a driver only that police pulled him over because he violated traffic laws. As such, the reason given cannot serve its procedural purpose. It does not permit Ms. Din to assess the correctness of the State Department’s conclusion; it does not permit her to determine what kinds of facts she might provide in response; and it does not permit her to learn whether, or what kind of, defenses might be available. In short, any “reason” that Ms. Din received is not constitutionally adequate.