Reversing the district judge, a panel opinion of the Sixth Circuit in Smith v. Jefferson County Board of School Commissioners found that there was no Establishment Clause violation when a Tennessee public school board contracted with a "religious institution," Kingswood Schools, Inc.,  to provide "alternative-school" services for students suspended or expelled from their "ordinary schools."  The county school board entered into the contract because of a funding shortfall and over seven years paid Kingswood, 1.7 million dollars; the arrangement ended when the county resumed providing alternative-school services. 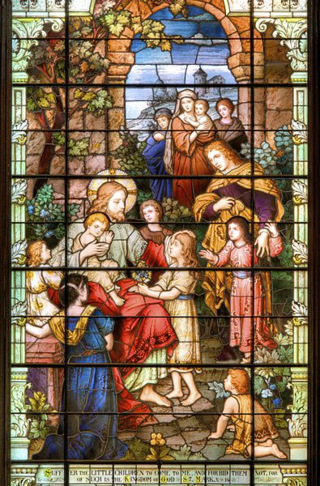 "But Jesus called them unto him, and said, Suffer little children to come unto me, and forbid them not: for of such is the kingdom of God" Stained glass mage via

The majority's opinion by Judge Julia Smith Gibbons, coupled with a separate concurring opinion by Judge Alice Batchelder, illustrates the disarray of Establishment Clause doctrine.   Yet both the majority and concurring opinion settle on the "endorsement test" and find it is not satisfied.  Specifically, the majority considered the "voluntary assemblies" as well as whether the  "Biblical quotes on the report cards, family-feedback forms and—for those who sought them out—the annual report and school- improvement plan" constituted endorsement.  As the majority described:

Students were required to submit a weekly family-feedback form—signed by their parents—in order to advance within the day program. That form contained the following quote from the Gospel of Luke: “Jesus . . . said, Suffer little children to come unto me, and forbid them not: for of such is the kingdom of God.” Parents were also required to sign report cards, which contained the same Biblical text. Kingswood’s director testified that the scripture—from the Gospel of Luke—could be interpreted as an invitation into the kingdom of God. The same passage appeared, accompanied by crosses, on the school’s Easter 2006 letter. The letter claimed: “Kingswood School is unique because we offer children a Christian environment of love and encouragement. . . . Kingswood remains one of the few places where children in need can get help in a Christian environment. We are a non-profit faith based ministry . . . .”

Those who sought out the 2005 Annual Report saw that it contains a picture of the chapel and says that each child will receive Christian religious training, and that emphasis is placed upon “instilling in each child a personal faith in God, and the assurance of the saving grace of Jesus Christ.” The “school improvement plan,” completed before the Jefferson County contract and still in effect afterward, stated the belief that schools must provide for “spiritual growth” in order to serve the “‘whole’ student.”

The Kingswood website also contained some religious references. It claimed, for example, that “Kingswood has survived independently by remaining true in faith to the principles of a Christian education without being bound to the doctrine of a particular denomination or sect’s control.” It states that the school will take care of a child’s “spiritual and religious life,” although it will not compel a student to adopt any particular religious doctrine. The website refers to Kingswood as a “Christian charity,” and explains its “Methodist-rooted beginnings.” It says that the school “has observed a Christian approach that has remained inter- faithed and unaffiliated with a particular Christian denomination.”

In its analysis, the court characterizes the Christian language as "de minimus" and concludes that a "reasonable observer would view all of these in the specific context of the arrangement that Kingswood had with Jefferson County."  The arrangement saved taxpayer money and the court found it noteworthy that no parents or students complained.  Instead, it reiterates that the complaint was by teachers of the public school who were terminated.  The complaint was originally dismissed for lack of standing; the Sixth Circuit reversed en banc in 2011.  The concurring opinion goes further and calls the case an "employment-contract dispute masquerading as an Establishment Clause case."

Yet the Establishment Clause disarray is not attributable to the procedural posture or the application of the so-called "endorsement test," but to questions about the test to be applied.  According to the majority, there are "three main jurisprudential threads": the Lemon test; the endorsement test as a refinement of Lemon; and the "historical practice" test as articulated in Town of Greece v. Galloway, the closely-divided 2014 decision by the United States Supreme Court upholding a town council's prayer.  The majority finds the historical practice test inapposite, but the concurrence argues for its application.

Interestingly, the court majority distinguishes Doe v. Elmbrook School District, in which the Seventh Circuit en banc found that an Establishment Clause violation existed when the school held graduation ceremonies in a church. The United States Supreme Court denied certiorari in Elmbrook, over a dissent by Justice Scalia (joined by Justice Thomas), arguing that the lower court's opinion is "fundamentally inconsistent" with a "number of points" "made clear" by Town of Greece v. Galloway. In her concurrence, Judge Batchelder essentially agrees with Justice Scalia. Judge Batchelder asks whether the school board's "contract would be historically acceptable to the Framers," seemingly assumes that it would be, and then would engage in a "fact-sensitive" inquiry regarding coercion.  Judge Batchelder characterizes the biblical references as "innocuous," so presumably she would not find them coercive.

Yet bible verses on mandatory student correspondence that must be signed by parents on a weekly basis does seem to raise the specter of coercion - - - even if no parents or students of the "alternative-school" complained.