A New York appellate court has held that an "undocumented" immigrant can be admitted to the state bar and the practice of law in its opinion in In the Matter of Application of Cesar Adrian Vargas. 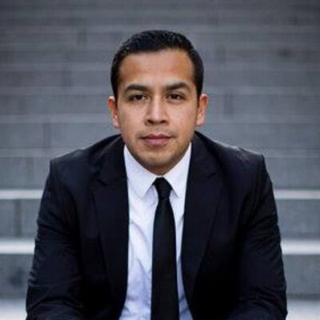 The court considered whether Vargas (pictured right), an "undocumented" immigrant who does posses documents authorizing him to be in the United States and to work under the Deferred Action for Childhood Arrivals (DACA) policy, could be admitted to the New York bar.  The court determined that under state law he could.  Importantly, the court also determined that pursuant to the Tenth Amendment, this state law should prevail.

The statutory landscape is somewhat complex.  As the court explains most succinctly:

[The issue is] whether such an individual is barred from admission to the practice of law by a federal statute, 8 USC § 1621, which generally prohibits the issuance of state professional licenses to undocumented immigrants unless an individual state has enacted legislation affirmatively authorizing the issuance of such licenses.  This presents an issue of first impression in New York and, in terms of the applicability of 8 USC § 1621 and its compatibility with the Tenth Amendment of the United States Constitution, an issue of first impression nationwide.

We hold that a narrow reading of 8 USC § 1621(d), so as to require a state legislative enactment to be the sole mechanism by which the State of New York exercises its authority granted in 8 USC § 1621(d) to opt out of the restrictions on the issuance of licenses imposed by 8 USC § 1621(a), unconstitutionally infringes on the sovereign authority of the state to divide power among its three coequal branches of government.  Further, we hold, in light of this state’s allocation of authority to the judiciary to regulate the granting of professional licenses to practice law (see Judiciary Law § 53[1]), that the judiciary may exercise its authority as the state sovereign to opt out of the restrictions imposed by section 1621(a) to the limited extent that those restrictions apply to the admission of attorneys to the practice of law in the State of New York.

In essence, the court holds that a federal statute cannot constitutionally require that only a legislative enactment of a state will satisfy the statute's opt-out provision.

While the court noted that it is "unusual" for a state court to pass judgment on the constitutionality of a federal statute, it is not unprecedented.

The court found that the Tenth Amendment is implicated because "although Congress has left the ultimate determination whether to extend public benefits, including professional licensure, to the states, it has, at the same time, prescribed the mechanism" - - - exclusively legislative - - - "by which the states may exercise that authority."  But in New York,  the legislature has "determined that the state judiciary is the sovereign authority vested with the responsibility for formulating the eligibility qualifications and processes governing the admission of attorneys and counselors to the practice of law."  Thus, the court concludes that the legislative limitation in the federal statute "cannot withstand scrutiny under the Tenth Amendment."

The court analogized to Gregory v. Ashcroft (1991) in which the United States Supreme Court relied on the Tenth Amendment to reject a federal age discrimination claim by state judges to Missouri's mandatory retirement age of 70.

Although Gregory addressed the state’s interest in determining who holds office, the State of New York has no less an interest in determining which of its branches of government is empowered to exercise the discretion authorized by section 1621(d) to determine who may be licensed as an attorney and counselor-at-law.  Indeed, the role of New York courts in regulating attorneys is deliberate, well-considered, and time-tested.  There are sound reasons why, in New York, the responsibility for attorney admissions is vested in the state’s judiciary rather than in other branches or departments of government.  As Judge Benjamin Cardozo declared nearly 90 years ago, an attorney is “an officer of the court, and, like the court itself, an instrument or agency to advance the ends of justice.”

The court then cites the "variety of rules governing the admission and conduct of attorneys" that the New York  judicial branch formulates and oversees: the Rules of Professional Conduct;  the State Board of Law Examiners;  the 50-hour pro bono requirement for new attorney admissions;  the licensure of legal consultants; the admission of counsel pro hac vice;  the payment of biennial attorney registration fees;  the parameters of attorney advertising;  the requirements for attorney-client retainer agreements;  and the imposition of discipline upon attorneys who violate the state’s ethics rules.

For the court, the "ability, indeed the right, of the states to structure their governmental decision-making processes as they see fit is essential to the sovereignty protected by the Tenth Amendment."  Thus, the federal statute cannot limit the decision regarding noncitizen licensure to only one branch of a state's government.

While equal protection and other constitutional arguments were raised in the case, the court's interpretation of the federal statute and its own conclusion regarding the applicant's suitability for bar admission obviated consideration of those arguments.

[full disclosure: Vargas is a graduate of CUNY School of Law].

§ 1621. Aliens who are not qualified aliens or nonimmigrants ineligible for State and local public benefits

Notwithstanding any other provision of law and except as provided in subsections (b) and (d) of this section, an alien who is not--
(1) a qualified alien (as defined in section 1641 of this title),
(2) a nonimmigrant under the Immigration and Nationality Act, or
(3) an alien who is paroled into the United States under section 212(d)(5) of such Act for less than one year, is not eligible for any State or local public benefit (as defined in subsection (c) of this section).

Subsection (a) of this section shall not apply with respect to the following State or local public benefits:
(1) Assistance for health care items and services that are necessary for the treatment of an emergency medical condition (as defined in section 1396b(v)(3) of Title 42) of the alien involved and are not related to an organ transplant procedure.
(2) Short-term, non-cash, in-kind emergency disaster relief.
(3) Public health assistance for immunizations with respect to immunizable diseases and for testing and treatment of symptoms of communicable diseases whether or not such symptoms are caused by a communicable disease.
(4) Programs, services, or assistance (such as soup kitchens, crisis counseling and intervention, and short-term shelter) specified by the Attorney General, in the Attorney General's sole and unreviewable discretion after consultation with appropriate Federal agencies and departments, which (A) deliver in-kind services at the community level, including through public or private nonprofit agencies; (B) do not condition the provision of assistance, the amount of assistance provided, or the cost of assistance provided on the individual recipient's income or resources; and (C) are necessary for the protection of life or safety.

[note to readers—this is why the federal statutes do not even apply to DACA—since DACA recipients are LAWFULLY PRESENT: About Deferred Action for Childhood Arrivals

§ 1623. Limitation on eligibility for preferential treatment of aliens not lawfully present on basis of residence for higher education benefits

Notwithstanding any other provision of law, an alien who is not lawfully present in the United States shall not be eligible on the basis of residence within a State (or a political subdivision) for any postsecondary education benefit unless a citizen or national of the United States is eligible for such a benefit (in no less an amount, *452 duration, and scope) without regard to whether the citizen or national is such a resident.

This section shall apply to benefits provided on or after July 1, 1998.