In a closely-divided opinion, with the majority written by Justice Kennedy, the Court has decided that the Fourteenth Amendment requires states to license same-sex marriages in Obergefell v. Hodges.   The opinion rests on both due process and equal protection grounds.  The majority opinion joined by Ginsburg, Breyer, Sotomayor, and Kagan - - - there are no concurring opinions - - - is less than 30 pages, plus 2 appendices including the citations of same-sex marriage opinions.  Each of the four dissenting Justices - - - Chief Justice Roberts and Justices Scalia, Thomas, and Alito - - - wrote a separate dissenting opinion, with some joinders by other Justices.

The decision that the Fourteenth Amendment requires states to license same-sex marriages renders the second certified question regarding recognition irrelevant, as the discussion during oral arguments made clear.

Recall that the consolidated cases of Obergefell v. Hodges on certiorari from the Sixth Circuit opinion which had created a split in the circuits on the issue of the constitutionality of same-sex marriage bans.   There have been a record number of amicus briefs filed in the cases highlighting the interest in the case. 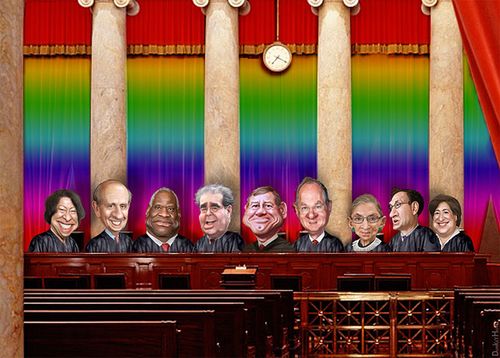 On the due process issue, Kennedy's opinion for the Court concludes that the right to marry is fundamental because:

Regarding equal protection, The Court does not articulate a standard for sexual orientation, but discusses the interlocking nature of the constitutional safeguards, relying on Loving, Zablocki v. Redhail, as well as the Lawrence.
The Court's opinion does address the "religious liberty" conflict of rights argument:

Finally, it must be emphasized that religions, and those who adhere to religious doctrines, may continue to advocate with utmost, sincere conviction that, by divine precepts, same-sex marriage should not be condoned. The First Amendment ensures that religious organizations and persons are given proper protection as they seek to teach the principles that are so fulfilling and so central to their lives and faiths, and to their own deep aspirations to continue the family structure they have long revered. The same is true of those who oppose same-sex marriage for other reasons. In turn, those who believe allowing same- sex marriage is proper or indeed essential, whether as a matter of religious conviction or secular belief, may engage those who disagree with their view in an open and searching debate. The Constitution, however, does not permit the State to bar same-sex couples from marriage on the same terms as accorded to couples of the opposite sex.

In dissent, Chief Justice Roberts - - - who some thought might join the majority and in a rare performance read from his dissent on the bench - - - emphasized that limited nature of judicial review and the power of the Court, concluding that the majority's opinion is an "extraordinary step" and predicting that because it is a decision of "five lawyers" this will make the "dramatic social change that much more difficult to accept."
The majority bases its conclusion that same-sex marriage is a fundamental right on "four principles and traditions": (1) right to person choice in marriage is "inherent in the concept of individual autonomy"; (2) "two-person union unlike any other in its importance to the committed individuals"; (3) marriage safeguards children and families; (4) marriage is a keystone to our social order. - See more at: http://live.scotusblog.com/Event/Live_blog_of_opinions__June_26_2015#sthash.OLg4SIRd.dpuf

As I read the majority opinion, I looked in vain for identification or application of a standard of review (such as strict scrutiny, which would be applicable if a fundamental right were being infringed [substantive due process] or if a classification infringed upon a fundamental right [equal protection]). As to religious liberty, let us modify the majority's pontification by imagining instead that this was the Brown v. Board of Education decision: "Finally, it must be emphasized that religions, and those who adhere to religious doctrines, may continue to advocate with utmost, sincere conviction that, by divine precepts, African-American children should not be permitted to attend school with white children. The First Amendment ensures that religious organizations and persons are given proper protection as they seek to teach the principles that are so fulfilling and so central to their lives and faiths, and to their own deep aspirations to continue the racial social structure they have long revered." So, just as we honor and respect the sincere and deeply held religious beliefs that the LGBT community is an abomination in the eyes of [insert deity here], we should honor and respect the sincere and deeply held religious beliefs that African-Americans bear the Mark of Cain and are inferior to whites in the eyes of [insert deity here]?