In its divided opinion in Children First Foundation v. Fiala, the Second Circuit held that the Commissioner of Motor Vehicle's rejection of "Choose Life" license plates for the state's specialty plate program is constitutional.  Judge Pooler, joined by Judge Hall, reversed the district judge's conclusion that the rejection violated the First Amendment.

The Second Circuit's divided opinion enters the fray of what might be called the developing doctrine of license plates, be they state-mandated, vanity, or as here, "specialty" plates issued by the state as a means of raising revenue. As we've discussed, the Fourth Circuit recently held that North Carolina's provision of a "Choose Life" specialty license plate violated the First Amendment; the New Hampshire Supreme Court invalidated a vanity license plate regulation requiring "good taste"; a Michigan federal district judge similarly invalidated a refusal of specific letters on a vanity plate; and on remand from the Tenth Circuit, the design of the Oklahoma standard license plate was upheld.

The progenitor of this doctrine is the classic First Amendment case of Wooley v. Maynard (1977) involving compelled speech.  This Term the Court heard oral arguments in Walker v. Texas Sons of Confederate Veterans; a divided Fifth Circuit had held that the rejection of the Sons of Confederate Veterans plate (featuring the Confederate flag) was a violation of the First Amendment as impermissible content and viewpoint discrimination.  The Second Circuit stayed the mandate of its decision pending the outcome of Walker.

The specialty license plate litigation involves the intersection of a number of First Amendment doctrines.  As Judge Pooler's opinion in Children First Foundation expressed its holding:

We conclude that the content of New York’s custom license plates constitutes private speech [rather than government speech] and that the plates themselves are a nonpublic forum. CFF’s facial challenge fails because New York’s custom plate program did not impermissibly vest the DMV Commissioner with unbridled discretion in approving custom plate designs. Furthermore, that program, as applied in this case, was reasonable and viewpoint neutral, which is all that the First Amendment requires of restrictions on expression in a nonpublic forum. 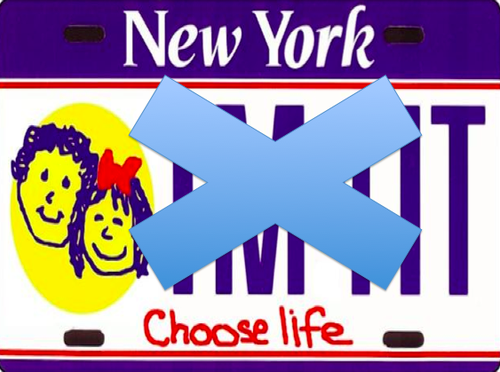 Judge Pooler's well-structured opinion supports this conclusion.  First, the court considers whether the license plate is government speech or private speech.  If the speech is government speech, then the First Amendment has little application. (Recall that this was the position of the dissenting judge in the Fifth Circuit's decision in Sons of Confederate Veterans).  Agreeing with other circuits, the court reasons that an application of Pleasant Grove City, Utah v. Summum (2009) and Johanns v. Livestock Marketing Ass’n (2005) leads to " little difficulty concluding that such an observer would know that motorists affirmatively request specialty plates and choose to display those plates on their vehicles, which constitute private property."

Next, Judge Pooler's opinion considers the type of forum and concludes it is a "nonpublic forum," rejecting a comparison to a designated public forum formed when the government accepts advertising on buses.   Nevertheless, the opinion notes that the prohibition of "unbridled discretion" as a type of prior restraint is prohibited even in nonpublic forums.
However, the court finds that the DMV does not exercise unbridled discretion that renders the DMV specialty license plate program facially unconstitutionally.  The court does note that the statute and regulation afford the DMV "broad discretion" and - - - standing alone - - - their ability "to provide an adequate safeguard against the Commissioner’s exercise of unbridled authority is dubious."  This argument is the centerpiece of Judge Livingston's extensive dissent.  For the majority, the agency policies and practices, written and unwritten, are highly pertinent.  The court specifically considers whether there was a uniform application.  It approvingly notes that the DMV denied a vanity plate for "RU486," with its reference to the so-called "morning-after pill."  And the court distinguishes specialty plates like "Cop Shot" and "Union Yes":

bringing to justice individuals who have attacked police officers cannot reasonably compare—either by its very nature or by the level of contentiousness that surrounds it—to the issue of abortion. With respect to the decision to issue a “Union Yes” plate, while the myriad issues pertaining to organized labor in the United States are social and political in nature, there is no basis to conclude that the Department failed to apply the policy against creating plates that touch upon contentious political issues as opposed to having applied the policy and merely reaching a different result than it did with the “Choose Life” plate.

Finally, regarding the as-applied challenge, which in some respects overlaps with the facial challenge, the court noted that while the distinction between viewpoint and content discrimination can be "hazy," a rejection of all abortion-related speech in a nonpublic forum is the type of content related policy that is subject only to a reasonableness requirement.  The court recognized the state's legitimate interests of avoiding road rage and avoiding the appearance of the government endorsing one side in a contentious political debate.  Interestingly, regarding "road rage," the court rejected CFF’s contention that because the “Choose Life” plates have been "available for purchase in other states for twelve years with no definitive proof of ill effects," this  and concluded that this did not render unreasonable New York’s decision, especially given the timing of the application and ejection when "the DMV was aware of violent protests and bombings at abortion clinics."
Additionally, the court rejected CFF's due process and equal protection claims.
The Second Circuit's opinion is sure to be reevaluated when the United States Supreme Court renders its decision in Walker v. Sons of Confederate Veterans, as the court recognized when it stayed its mandate.  The court's delivery of its decision before Walker could be subjected to much speculation.