In its opinion in United States v. Pierce,  the Second Circuit considered the arguments of co-defendant/appellant Melvin Colon regarding the admissibility of a rap video and images of tattoos in the criminal trial. The unanimous opinion, authored by Judge Denny Chin, affirmed the convictions of Colon and his co-defendants for conspiracy, racketeering, murder, narcotics trafficking, and firearms offenses largely related to their activities as members of a "violent street gang, dubbed the Courtlandt Avenue Crew (ʺCACʺ) by the government,"  as well as a gang known as Godʹs Favorite Children, or ʺGFC.ʺ 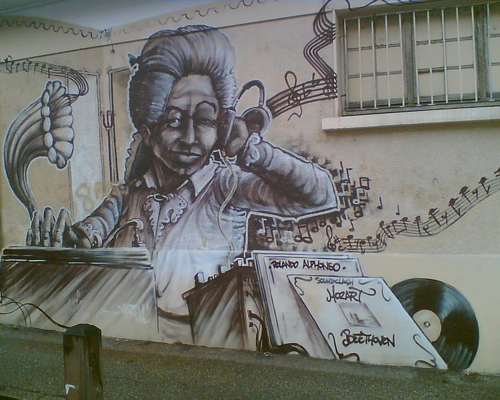 Colon contended that his First Amendment rights were violated when the district court permitted the government to present as evidence a rap video and images of his tattoos, some of which he had posted to his Facebook page.  The "rap video" portrayed Colon as rapping: ʺYG to OG / Somebody make somebody nose bleed/ Iʹm OG shoot the Ruger / Iʹm a shooter.ʺ A witness, also seen in the video, testified for the prosecution that the Young Gunnaz crew, or YG, was feuding with the OG (formerly the GFC). The images of the tattoos introduced at trial were explained by the Second Circuit as including:

a close‐up of Colonʹs hand, showing his ʺY.G.K.ʺ tattoo, which stands for ʺYoung Gunnaz Killer.ʺ In some of the photographs Colon is pointing a gun at his Y.G.K. tattoo, indicating, according to the government, his desire to harm members of the Young Gunnaz. Other tattoos depicted in the photographs introduced at trial included one on his right arm that read ʺCourtlandtʺ; tattoos on his left arm that referenced [co-defendant] Meregildoʹs nicknames (ʺYoungʺ and ʺKillaʺ); and one stating ʺM.I.P. [Mac In Peace] T‐Money,ʺ referring to Harrison, the former leader of CAC.

The Second Circuit panel rejected the First Amendment challenges to the introduction of the evidence. First, the court noted that the conviction did not rest on the expression: "here, the speech is not 'itself the proscribed conduct,'" interestingly citing United States v. Caronia, the 2012 Second Circuit case reversing a conviction for promoting the off-label use of prescription drugs. Additionally, the Second Circuit considered Colon's argument that the rap lyrics were merely "fictional artistic expressions," and discussed the New Jersey Supreme Court decision last year in State v. Skinner, noting that the court there observed that ʺ[o]ne would not presume that Bob Marley, who wrote the well‐known song ʹI Shot the Sheriff,ʹ actually shot a sheriff.ʺ  However, the Second Circuit distinguished Skinner in which the court reversed the conviction (although not explicitly on the basis of the First Amendment), by concluding that here the rap lyrics and tattoos were properly admitted, because they were relevant and their probative value was not substantially outweighed by the danger of unfair prejudice.  Specifically - - - if cursorily - - - the Second Circuit reasoned:

The government proffered the rap video to show Colonʹs animosity toward the Young Gunnaz, as well as his association with CAC. The government similarly offered the tattoo evidence to help establish his motive for violence against the Young Gunnaz, and to show his loyalty to Harrison and Meregildo ‐‐ indeed other members of CAC had similar tattoos. Hence, the rap video and tattoos were relevant, their probative value was not outweighed by the danger of unfair prejudice, and Colonʹs First Amendment rights were not implicated when the district court admitted the evidence from his social media account.

Colon also challenged a portion of the Stored Communications Act (SCA), 18 U.S.C. § 2703(c)(1), regarding the subpoenaing of Facebook for page content.  Appellant Colon, however, is not challenging the Government's acquisition of his own Facebook content, however, but argued that SCA's prohibition of his subpoena of Facebook content from a witness, denied him his Fifth Amendment due process right to present evidence and his Sixth Amendment right to confront adverse witnesses.  Colon managed to obtain some of the Facebook postings through the work of a private investigator and his attorney used it in cross-examination and introduced portions of it.  The Second Circuit declined to reach the constitutional question, given that "Colon possessed the very contents he claims the SCA prevented him from obtaining, and his suggestion that there could have been additional relevant exculpatory material in the Parsons Account is purely speculative."

The court's opinion resolves the issues before it (including a sentencing issue which earned a remand), but does little to elucidate the important First Amendment concerns that remain regarding the admissibility of rap lyrics and tattoos in criminal trials.

Listed below are links to weblogs that reference Second Circuit Upholds Admissibility of Rap Video and Tattoos Against First Amendment Challenge: