The Court today heard oral arguments in two parts in the consolidated cases of Obergefell v. Hodges on certiorari from the Sixth Circuit opinion which had created a split in the circuits on the issue of the constitutionality of same-sex marriage bans.   There have been a record number of amicus briefs filed in the cases highlighting the interest in the case.

For oral argument on the first certified question - - -does the Fourteenth Amendment require a state to license a marriage between two people of the same sex? - - - Mary Bonauto argued for the Petitioners; Solicitor Donald Verrilli argued for the United States as amicus curiae supporting Petitioners; and John Bursh, as Special Assistant Attorney for Michigan argued for Respondents.

For oral argument on the second certified question - - - does the Fourteenth Amendment require a state to recognize a marriage between two people of the same sex when their marriage was lawfully licensed and performed out-of-state? - - -Douglas Hallward-Driemeier argued for Petitioners and Joseph Whalen, Associate Solicitor General of Tennessee, argued for Respondents.

The Court and the advocates acknowledged that the second question is only reached if the first question is answered in the negative: Justice Ginsburg and Justice Kagan both posited this principle with Hallward-Driemeier and Whalen, respectively, agreeing. Chief Justice Roberts noted that" we only get to the second question if you've lost on that point already, if we've said States do not have to recognize same-­sex marriage as a marriage," and later raised the issue of whether the second question made practical sense:

It certainly undermines the State interest that we would, assuming arguendo, have recognized in the first case, to say that they must welcome in their borders people who have been married elsewhere. It'd simply be a matter of time  until they would, in effect, be recognizing that within the State. 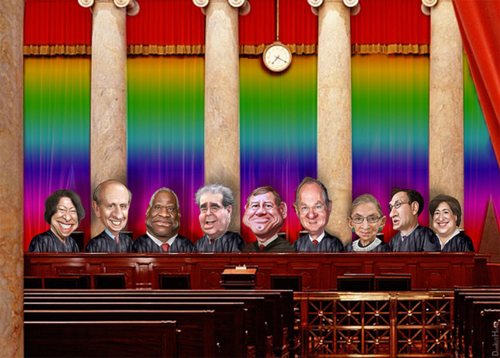 The themes of the oral arguments held no surprising issues:

Is a same-sex marriage decision by the Court premature?  Interestingly, Justice Kennedy pointed out that it is "about the same time between Brown and Loving as between Lawrence and this case. It's about 10 years."

Should it be the Court or the states that should decide?  The question of the proper role of judicial review has long preoccupied the courts in the context of same-sex marriage. Justice Scalia raised this issue several times, but when John Bursh raised it on behalf of Michigan, Justice Kagan responded that "we don't live in a pure democracy; we live in a constitutional democracy."

What about religious freedom?  How do we know that ministers won't be forced to perform "gay marriages"?

Should the case be resolved on Equal Protection or Due Process?  Justice Kennedy asked General Verrilli about Glucksberg,   Verrilli replied:

As an equal protection case, it is one about sexual orientation or sex discrimination?  One of the more interesting questions was posed by Chief Justice Roberts to Bursch:

Counsel, I'm ­­ I'm not sure it's necessary to get into sexual orientation to resolve the case. I mean, if Sue loves Joe and Tom loves Joe, Sue can marry him and Tom can't. And the difference is based upon their different sex. Why isn't that a straightforward question of sexual discrimination?

How is the state's interest in procreation related to the ban on same-sex marriage?  Justice Ginsburg, as well as others, posed questions about the elderly not being barred from marriage.
Is marriage a changing institution or is a constant for millennia?  Justice Ginsburg predictably noted that marriage was once "a dominant and a subordinate relationship," with women being subordinate, while Chief Justice Roberts disputed the fact that women's subordination (or coverture) was a universal aspect of marriage.
Does the Full Faith and Credit Clause, Article IV, guarantee a state will recognize another state's marriage?  Justice Scalia noted he was "glad" to be able to quote Article IV, "a portion of the Constitution that actually seems to be relevant," although there remained a lack of clarity in its applications.  Is a marriage a public act?  record?  judgment?

The open question is whether the Court's opinion will be as predictable as the questions.