Before 2011, Arizona law required that voter registration forms include a blank space for the registrant’s party preference.  But a 2011 law required the voter registration form distributed by the Arizona Secretary of State to list the two largest parties (as measured by number of registered voters) on the form, as well as provide a blank line for “other party preferences.” Ariz. Rev. Stat. § 16-152(A)(5).

In response to the amendment, the Arizona Secretary of State revised box 14 on the Registration Form, and the opinion includes this illustration: 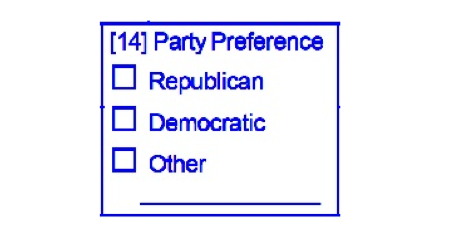 The panel majority opinion by Judge Tashima noted the intertwining of the equality and First Amendment claims:

“Restrictions on voting can burden equal protection rights as well as ‘interwoven strands of liberty’ protected by the First and Fourteenth Amendments—namely, the ‘right of individuals to associate for the advancement of political beliefs, and the right of qualified voters, regardless of their political persuasion, to cast their votes effectively.’”

It stated that the party challenging the law bears “the initial burden of showing that [the state’s] ballot access requirements seriously restrict the availability of political opportunity" and that here any burden was de minimis.  The panel thus applied rational basis scrutiny which the new form easily passed.

Concurring, Judge McKeown argued that the rational basis review burden-shifting standards derived from Ninth Circuit precedent and which the majority applied were "inconsistent with the Supreme Court’s approach to analyzing voting rights challenges." Instead, the court should apply the balancing tests articulated in Burdick v. Takushi (1992) and reiterated in Crawford v. Marion County Election Board (2008), although Judge McKeown acknowledged that the "semantic distinction between the balancing test and the rational basis standard" may make little difference in most cases.  Indeed, here Judge McKeown recognized that Arizona's asserted interests in reducing printing costs and easing administrative efficiency are “sufficiently weighty to justify” the speculative burden on the plaintiff minority parties' rights.