In a well-crafted but hardly surprising opinion in Abu-Jamal v. Kane, Chief Judge Christopher Conner of the Middle District of Pennsylvania concluded that Pennsylvania's "Revictimization Relief Act" is unconstitutional.

In addition to any other right of action and any other remedy provided by law, a victim of a personal injury crime may bring a civil action against an offender in any court of competent jurisdiction to obtain injunctive and other appropriate relief, including reasonable attorney fees and other costs associated with the litigation, for conduct which perpetuates the continuing effect of the crime on the victim.

At the time of signing, it was clear that the Act was primarily directed at Mumia Abu-Jamal; Abu-Jamal brought suit soon after the Act was passed; another challenge was brought by Prison Legal News and consolidated.

Judge Conner began his opinion by noting that the First Amendment does not "evanesce" at the prison gate, and ended it by stating that the First Amendment does not "evanesce at any gate." (emphasis in original).   In applying well-settled First Amendment doctrine, Judge Conner focused on both  Simon & Schuster v. Crime Victims Board (1991) (holding unconstitutional the so-called "Son of Sam" law) and Snyder v. Phelps (2011) (essentially holding that free speech trumped the tort of intentional infliction of emotional distress).  Judge Conner easily rejected the State's argument that the statute regulated "conduct" - - - which is, after all, the word in the statute and which would merit lower scrutiny - - - noting that:

throughout its brief legislative gestation, the law was championed primarily as a device for suppressing offender speech.  The Act's sponsor extolled its capacity to silence Abu-Jamal in particular.  The chairman of the house judiciary committee opined that the Act would end the "extreme distress" suffered by victims when offenders achieve celebrity, admonishing Goddard College for providing a "cold blooded murderer" [Abu-Jamal] with a speaking forum.

(emphasis in original; citations to Stipulation omitted).  As a content-regulation, the Act "instantly fails" the exacting scrutiny standard according to Judge Conner.

In addition to the content-restriction fatality, Judge Conner found that the Act was impermissibly vague and substantially overbroad as those doctrines are derived from due process.  The Act's "central limitation" turns on the unknowable emotive response of victims, which a person cannot determine "short of clairvoyance."   Moreover, the Act applies to "offenders," a term the statute does not define, and which could presumably apply to a wide swath of persons, including non-offender third parties who publish statements by offenders.  Relatedly, the overbreadth defect of the Act concerned the judge:

[T]he Act ostensibly affects protected - - - and critically important - - - speech, including: pardon applications, clemency petitions, and any testimony given in connections with those filings; public expressions of innocence, confessions, or apologies; legislative testimony in support of improved prison conditions and reformed juvenile justice systems; programs encouraging at-risk youth to avoid lives of crime; or any public speech or written work whatsoever, regardless of the speaker's intention or the work's relation to the offense.

In other words, if the victim can demonstrate "mental anguish," the statute would be satisfied.  And, combined with the broad notion of "offender," taken to its "logical conclusion," the Act would "limit an accused person's right to profess his innocence before proven guilty."

Pennsylvania would be wise not to appeal this judgment.  It would have even been more wise if the legislature had not passed - - - and the Governor had not signed - - - such a patently unconstitutional statute last year. 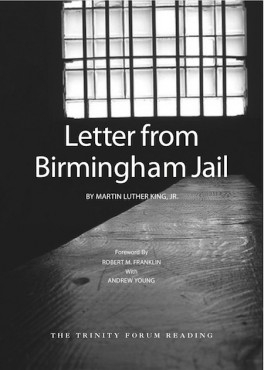 Would the PA Act have covered MLK's famous publication?