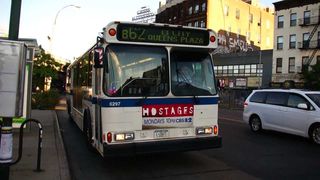 The case, American Freedom Defense Initiative v. Metropolitan Transportation Authority (AFDI v. MTA) should be read as part of a series of cases involving often but not always successful attempts to place anti-Muslim adverts in public places.  Previously in NYC, a federal judge found the Metropolitan Transit Authority's initial rejection of the advertisements under its (since amended) "civilty standard" to be unconstitutional and the advertisements appeared, causing some NYC residents to engage in "more speech" in reaction to the advertisements.  On the contrary, the Sixth Circuit found  the rejection of similar advertisements in southern Michigan buses by the governmental authority SMART to be constitutional under its policy prohibiting several categories of advertising including "political or political campaign advertising."  Last month, a Philadelphia district judge granted a preliminary injunction in favor of AFDI and found SEPTA's anti-disparagement  standard for advertising on its buses, and its rejection of the proffered AFDI advertisement, violates the First Amendment.  On the other hand, also last month, the Ninth Circuit upheld the rejection of advertisements proposed by Seattle Mideast Awareness Campaign applying a limited public forum doctrine.

Judge Koeltl described the advert, known as the "Killing Jews" ad,  as portraying

a menacing-looking man whose head and face are mostly covered by a head scarf. The ad includes a quote from “Hamas MTV”: “Killing Jews is Worship that draws us close to Allah.” Underneath the quote, the ad stated: “That’s His Jihad. What’s yours?”

The MTA determined that the ad violated MTA Standard § (a)(x), prohibiting material “the display of which the MTA reasonably foresees would imminently incite or provoke violence or other immediate breach of the peace.”  Thus, the MTA argued that it excluded the Killing Jews ad because it falls into two separate categories of unprotected speech: “fighting words,” under Chaplinsky v. New Hampshire (1942), and incitement of violence or lawlessness under Brandenburg v. Ohio (1969).

Judge Koeltl held that "this case plainly does not present the rare occurrence where one of these seldom-applied categories is met."

Koeltl's reasoning rested on the MTA's failure to show that this particular ad would immediately provoke violence.  The judge discounted the MTA's argument that NYC is a preferred "terrorism target" in favor of a view of a multicultural urbanity:

Indeed, the defendants [MTA] underestimate the tolerant quality of New Yorkers and overestimate the potential impact of these fleeting advertisements. It strains credulity to believe that New Yorkers would be incited to violence by ads that did not incite residents of Chicago and San Francisco to similar acts. This is not to minimize the terror threats to New York City, but those threats do not arise from these fleeting advertisements.

Subjecting the advertisement's rejection to strict scrutiny, the judge further held that the exclusion of the Killing Jews ad is not narrowly tailored to achieve any security interests.  "Rather than banning an advertisement outright, the transit authorities could run the disputed advertisement with adjacent disclaimers, or counter-advertisements, expressing disagreement with the ad and/or explaining its context," including its parodying of another ad campaign regarding the positive aspects of the word "jihad."

While these "more speech" suggestions are directed to the MTA, New Yorkers have also been known to resort to individualized attempts at "more speech," raising the problem of the MTA's efforts to combat "vandalism."