In its opinion in Fyock v. City of Sunnyvale, the Ninth Circuit upheld the constitutionality of a voter initiative, Measure C, prohibiting possession of "a large-capacity magazine," whether  "assembled or disassembled" and as defined as "any detachable ammunition feeding device with the capacity to accept more than ten (10) rounds."   The panel affirmed the district judge's denial of a motion for preliminary injunction agreeing that the plaintiff did not demonstrate a likelihood of prevailing on the merits. 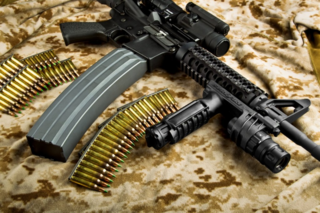 As to the level of scrutiny, the panel relied on Ninth Circuit precedent stating that "to determine the appropriate level of scrutiny, the court must consider (1) how closely the law comes to the core of the Second Amendment right; and (2) how severely, if at all, the law burdens that right." Here, the court found that while the magazine restriction "likely reaches the core Second Amendment right" given that it prohibits such magazines in the home, "its resulting impact" on the core right of self defense in the home is not severe.  Thus, intermediate scrutiny was appropriate.

Finally, the court noted that in the context of Second Amendment challenges, intermediate scrutiny requires: “(1) the government’s stated objective to be significant, substantial, or important; and (2) a reasonable fit between the challenged regulation and the asserted objective.”  The court found that Sunnyvale's stated interests - - -to promote public safety by reducing the harm of intentional and accidental gun use; to reduce violent crime and reduce the danger of gun violence, particularly in the context of mass shootings and crimes against law enforcement - - - were undoubtedly substantial and important.  It also stated that there was a reasonable fit: Sunnyvale “submitted pages of credible evidence, from study data to expert testimony to the opinions of Sunnyvale public officials."  The court held that Sunnyvale was entitled to rely on such evidence and that the district judge was not required to find that the ordinance is the least restrictive means of achieving Sunnyvale’s interest.

The opinion is a concise and excellent example of the general state of Second Amendment analysis after District of Columbia v. Heller (2008) and McDonald v. Chicago (2010), especially relevant given increasing efforts to ban large capacity magazines.

Listed below are links to weblogs that reference Ninth Circuit Upholds Constitutionality of Ammunition Regulation: