Governor Mike Pence of Indiana  in a "private ceremony," signed the controversial Senate Act 101, a state RFRA, into law. 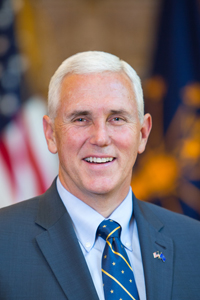 Governor Mike Pence of Indiana via

Like the federal RFRA - - - the basis for the majority opinion of the United States Supreme Court in Hobby Lobby v. Burwell finding that the so-called "contraceptive mandate" of "Obamacare" was invalid - - - the Indiana RFRA provides in section 8:

The Indiana statute makes clear that a if a person's exercise of religion "is likely to be substantially burdened," the person may "assert the violation or impending violation as a claim or defense in a judicial or administrative proceeding, regardless of whether the state or any other governmental entity is a party to the proceeding."

For many, this signals a religious exemption from anti-discrimination laws protecting LGBTQ persons.  (Although Indiana does not include sexuality or gender identity in its discrimination laws, some localities and institutions do.)  Governor Pence alluded to this argument, even as he interestingly (and some might say misleadingly) highlighted the "government action" requirement in his signing statement:

“This bill is not about discrimination, and if I thought it legalized discrimination in any way in Indiana, I would have vetoed it. In fact, it does not even apply to disputes between private parties unless government action is involved. For more than twenty years, the federal Religious Freedom Restoration Act has never undermined our nation’s anti-discrimination laws, and it will not in Indiana."

Nevertheless some companies are already reacting to a perception that Indiana has now sanctioned LGBTQ discrimination.

The Indiana RFRA is very similar to the federal RFRA. Four Circuits, and the Justice Department, have taken the position that RFRA can be raised as a defense in a private suit: http://joshblackman.com/blog/2015/03/26/comparing-the-federal-rfra-and-the-indiana-rfra/

True. But I am not sure that is how most people - - - nonlawyers unfamiliar with Shelly v. Kraemer - - - would interpret "government action" as including litigation between "private parties" because the courts are involved.