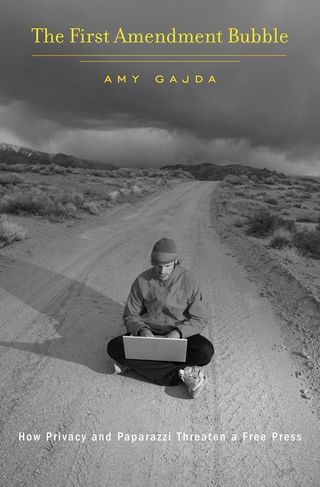 Professor Lidsky provides the provocative thesis of Gajda's book: it's the fault of quasi-journalists and paparazzi that the First Amendment is losing its luster, or at least its ability to protect what might be called "real journalists."

Lidsky's last paragraph provides a terrific insight - - - as we wait for the United States Supreme Court's opinion in Williams-Yulee v. The Forida Bar - - - linking how elected state judges might feel about the press given their own experiences.

Although she never makes the point explicitly, Gajda’s book is fundamentally an exercise in legal realism. Even though the scope of constitutional rights is not supposed to vary with the winds of public opinion, The First Amendment Bubble documents that the scope of press rights has changed as judges have perceived changes in the press. As she amply and comprehensively demonstrates, trial court judges seem more hostile to the media and more favorable to privacy claimants than their appellate brethren. This hostility may reflect the fact that trial judges, especially state judges, are more likely to have been elected to their positions than their appellate brethren and are thus more likely to be alert to shifts in public opinion. Perhaps the starting point, then, for changing judicial opinions is changing public opinion. To do this, journalists must change their slipshod and sensationalist practices. Let’s hope they can.

Looks like a terrific read, especially for those who might not agree that journalists have lost their integrity any more than lawyers (or judges) may have.

Listed below are links to weblogs that reference Daily Read: Lidsky on Gajda's The First Amendment Bubble: