A panel of the Second Circuit issued its amended opinion in Garcia v. Does now holding that the New York City police officers do have qualified immunity in the First Amendment suit arising from plaintiffs' arrests for participating in a demonstration in support of the Occupy Wall Street movement.

Recall that in December, the full Second Circuit granted review of the case.  In today's opinion, the court noted that it had withdrawn the panel opinion, was granting the petition for rehearing, and now reversing the district judge and remanding the case with instructions to dismiss the complaint.

Thus, the panel now finds that qualified immunity can be - - - and is here - - - established at the pleading stage, citing  Wood v. Moss (2014), noting that  "qualified immunity protects officials not merely from liability but from litigation, that the issue should be resolved when possible on a motion to dismiss, before the commencement of discovery, to avoid subjecting public officials to time consuming and expensive discovery procedures."  This echoes Judge Livingston's dissent in the original panel opinion.

The underlying First Amendment issue was whether defendant police officers "implicitly invited the demonstrators to walk onto the roadway of the Brooklyn Bridge, which would otherwise have been prohibited by New York law" and then arrested them without "fair warning."  Today's panel opinion now explains:

On the face of the Complaint, the officers were confronted with ambiguities of fact and law. As a matter of fact, the most that is plausibly alleged by the Complaint and the supporting materials is that the police, having already permitted some minor traffic violations along the marchers’ route, and after first attempting to block the protesters from obstructing the vehicular roadway, retreated before the demonstrators in a way that some of the demonstrators may have interpreted as affirmatively permitting their advance. Whether or not such an interpretation was reasonable on their part, it cannot be said that the police’s behavior was anything more than – at best for plaintiffs – ambiguous, or that a reasonable officer would necessarily have understood that the demonstrators would reasonably interpret the retreat as permission to use the roadway.

This "all doubts resolved in favor of the defendants" stance on a motion to dismiss for qualified immunity illustrates how very high the bar has become for protestors raising a First Amendment claim. 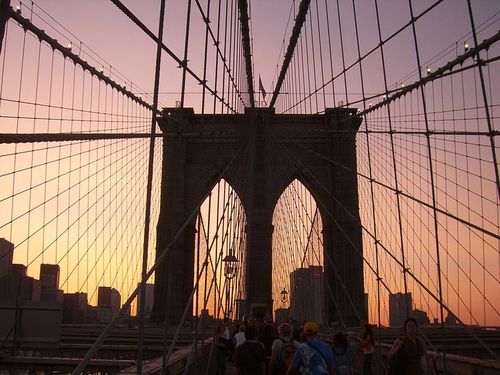 [image of Brooklyn Bridge via]

Listed below are links to weblogs that reference Second Circuit Reverses Itself on Qualified Immunity in Brooklyn Bridge Protest: