On Friday afternoon, the Court granted certiorari in the Sixth Circuit consolidated cases in DeBoer v. Snyder from the Sixth Circuit. [Recall that a divided Sixth Circuit panel reversed the district court decisions in Kentucky, Michigan, Ohio, and Tennessee].

Interestingly, the questions presented use the word "require."  [update: here's Rick Hasen and here's Michael Dorf on that very issue]. 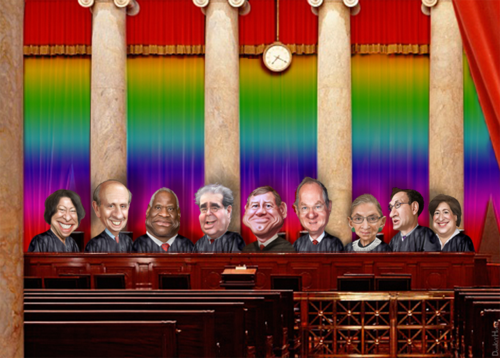 The remainder of the Order sets out the briefing schedule and oral argument:

Listed below are links to weblogs that reference Supreme Court to Hear Same-Sex Marriage Case This Term:

It is a SHAME the Supreme Court 'needs to render a decision regarding the Fourteenth Amendment whose wording is about as clear as anything can be!

Since states, including our state, Kentucky, feel they have the 'authority' - 'right' to abridge the "privileges" and "immunities" of we citizens of the United States, the US Supreme Court must FINALLY rule to enforce our constitutionally guaranteed rights - freedoms!