Recall that the Florida Supreme Court held that Florida Code of Judicial Conduct, Canon 7C(1) (substantially similar to Canons 4.1(A)(8) and 4.4 of the ABA Model Code of Judicial Conduct), satisfied strict scrutiny, finding that there were two compelling governmental interests (preserving the integrity of the judiciary and maintaining the public's confidence in an impartial judiciary) and that the provision was narrowly tailored to serve these interests (the prohibition of direct fundraising nevertheless allows for the establishment of "campaign committees" to raise funds).  The Florida Supreme Court's opinion also pointedly noted that federal "judges have lifetime appointments and thus do not have to engage in fundraising" were divided on the constitutionality of the canon, while state judges were not. 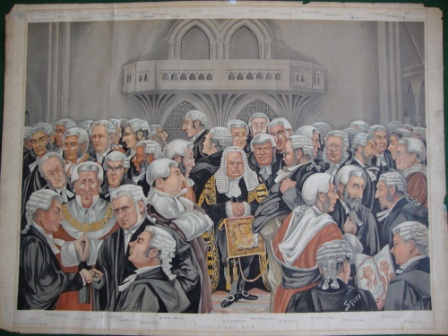 "Bench and Bar" via

In the arguments before the life-tenured Justices today, the problem of line-drawing was pronounced.  The fact that the Florida rule was a compromise that allowed judicial campaigns to establish committees to solicit funds and allowed the candidate to know who had contributed and allowed the candidate to write thank you notes called into question whether the canon was narrowly tailored. But, as Justice Kagan noted, that might mean that the state would simply broaden the proscriptions, to include thank you notes for example, and asked whether that would be constitutional.  Counsel for the petitioner ultimately answered in the negative, linking the election to the availability of money.

At the heart of this issue is whether judicial elections are like other elections or whether they are distinctly judicial.

Chief Justice Roberts seemingly leaned toward equating judicial and political elections, stating that "it's self-evident, particularly in judicial races" that "prohibiting a form of raising funds is to the great advantage of the incumbent" because the only way  "incumbents are going to be challenged if you have somebody who can get their own distinct message out."  Later he stated that the "fundamental choice was made by the State when they said we're going to have judges elected."  This echoes Justice O'Connor's concurring opinion in Republican Party of Minnesota v. White, (2002).

Yet the issue of the coercion of the people being solicited, including attorneys as I have previously discussed, surfaced repeatedly.  As Justice Sotomayor candidly revealed:

It's very, very, very rare that either by letter or by personal call that I ask a lawyer to do something, whether it's serve on a committee, help organize something, do whatever it is that I'm asking, that that lawyer will say no. Isn't it inherent in the lawyer/­judge context that people are going to say yes?

Whether the Court "says yes" to the ability of a state to ban direct solicitation by judicial candidates will most likely result in a closely divided opinion.

Listed below are links to weblogs that reference Supreme Court Hears Oral Arguments on Judicial Campaign Ethics and First Amendment: