In a Letter to the Governor of Alabama, Robert Bentley today, the Chief Justice of Alabama Supreme Court, Roy Moore (pictured) asked the Governor to continue to uphold the respect for different-sex marriage and reject the judicial "tyranny" of the federal district court's opinion last Friday finding the same-sex marriage ban unconstitutional.  He writes grounds the sacredness of man-woman marriage in the Bible, and writes 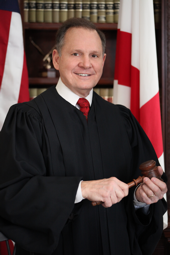 Today the destruction of that institution is upon us by federal courts using specious pretexts based on the Equal Protection, Due Process, and Full Faith and Credit Clauses of the United States Constitution. As of this date, 44 federal courts have imposed by judicial fiat same-sex marriages in 21 states of the Union, overturning the express will of the people in those states. If we are to preserve that “reverent morality which is our source of all beneficent progress in social and political improvement," then we must act to oppose such tyranny!

He argues that United States district court opinions are not controlling authority in Alabama, citing a case, Dolgencorp, Inc. v. Taylor, 28 So. 3d 737, 744n.5  (Ala. 2009), regarding a common law negligence claim rather than a constitutional issue. He does not argue the Supremacy Clause.

Justice Moore is no stranger to controversial positions, including promoting his biblical beliefs over federal  law, and gained notoriety as the "the Ten Commandments Judge."  Recall that Moore was originally elected to the Alabama Supreme Court with the campaign promise to “restore the moral foundation of the law” and soon thereafter achieved notoriety for installing a 5,280-pound monument depicting the Ten Commandments in the rotunda of the Alabama State Judicial Building. See Glassroth v. Moore, 335 F.3d 1282, 1285 (11th Cir. 2003). After federal courts found that the monument violated the Establishment Clause of the First Amendment, Glassroth v. Moore, 229 F. Supp. 2d 1290, 1304 (M.D. Ala. 2002), aff’d, Glassroth v. Moore, 335 F.3d 1282, 1284 (11th Cir. 2003), Chief Justice Moore was ordered to remove the monument. See Glassroth v. Moore, No. 01-T-1268-N, 2003 LEXIS 13907 (M.D. Ala. Aug. 5, 2003). After the deadline to remove the monument passed, Chief Justice Moore was suspended, with pay, pending resolution of an ethics complaint, which charged that he failed to “observe high standards of conduct” and “respect and comply with the law.” Jeffrey Gettleman, Judge Suspended for Defying Court on Ten Commandments, N.Y. Times, August 23, 2003, at A7.

In 2012, Justice Moore was re-elected to the Alabama Supreme Court as its chief justice after almost a decade out of office during which time he served as "President of the Foundation for Moral Law."

[UPDATE: A great video produced by Christopher Scott and Mary Baschab, University of Alabama School of Law, Class of 2011 is here].

Listed below are links to weblogs that reference Alabama Supreme Court Chief Judge Moore: federal courts have no power over state marriage law:

The Judge is absolutely correct, and I commend him for his principled opinion.

Regardless what one may personally think about gay marriage, motorcycle helmets, medical marijuana, et. al., the 10th Amendment is crystal clear and unassailable. Any and all powers not specifically delegated to the federal government are reserved to the States or to their citizens. Judicial activism/revisionism and the spinelessness of States have all but destroyed the 10th Amendment.

A Justice Moore speaks on behalf of God, the Creator and Supreme Ruler of the Universe, I see no reason why he should cite any Earthly authority for his "arguments."

You could have saved some typing by just say, "Roy Moore is an Idiot." Any Judge actively encouraging judicial anarchy should be removed for subverting the rule of law.