Writing exam questions that engage with current controversies can themselves cause controversy.

Or that seems to be what happened at one law school when the ConLawProf sought to incorporate the Ferguson protests into a First Amendment exam hypothetical.  Reportedly, this was the question:

"Write a memorandum for District Attorney Robert McCulloch on the constitutional merits of indicting Michael Brown's stepfather for advocating illegal activity when he yelled 'Burn this bitch down,' after McCulloch announced the grand jury's decision."

This seems like a plausible query, if a bit sparse on facts as related (depending on what students should be expected to know from what was covered in class).  The controversy sparks in part from the exam's role assignment to work for the prosecutor.  (As the report states: "But it's quite another thing to ask students to advocate for an extremist point that is shared by only the worst people in an exam setting. You don't give your students an exam where they have to defend Holocaust deniers or ISIS terrorists. It's inappropriate and not a fair measure of their understanding of law.")

However, the question's task (at least as I'm reading it) is to objectively discuss the merits.  Would such a charge contravene the First Amendment?  The issue calls for the articulation of the clear and present danger "test" as the professor's explanation of the question in the report attests.  It also would call for an application of cases, depending on which cases were covered,  such as Brandenburg v. Ohio (involving the Ku Klux Klan) and Hess v. Indiana (involving an anti-war protester). And, it seems to me that the prosecutor would have a very difficult time surmounting a First Amendment challenge to a charge, making an assignment to the prosecution side the more difficult one. 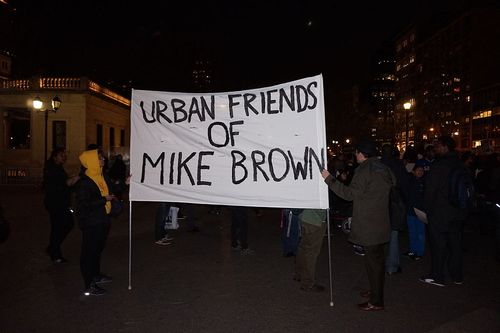 This should not make ConLawProfs shy away from using "controversial" material on exams, but to use them with care, with as much understanding of our students as possible, having listened to the concerns they bring forward in class discussions.  Indeed, the report does suggest that the controversy is simply not this exam.  There seem to be other issues including the lack of diversity at the law school.  A lack of diversity could mean that a small number of students would be emotionally involved with the question in ways that other students would not.  The same report contains a reaction from the dean and the professor, with an accommodation that this question will be disregarded in the grading of the exam.

Meanwhile, as has been widely reported, at least one law school is allowing some students to postpone final exams because of the controversies regarding the grand juries non-indictment in the killings of Michael Brown in Ferguson and Eric Garner in Staten Island.