As we noted, Judge Crabtree stayed the injunction himself, reasoning that although the injunction seemed firmly established given Tenth Circuit precedent, Kansas raised many jurisdiction and justiciability issues.

As is usual, there is no reasoning supporting the Supreme Court stay.  Here's the text of Justice Sotomayor's opinion:

IT IS ORDERED that the preliminary injunction entered by the United State District Court for the District of Kansas on November 4, 2014, is hereby stayed pending receipt of a response, due on or before Tuesday, November 11, 2014, by 5 p.m. ET, and further order of the undersigned or of the Court.

Perhaps we can expect another Order from Justice Sotomayor late on Tuesday? 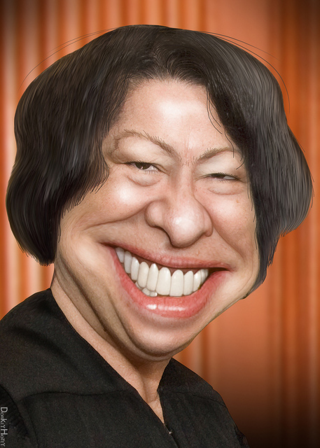 Caricature of Justice Sonia Sotomayor by Donkey Hotey via