The United States Supreme Court has granted certiorari in Reed v. Town of Gilbert, Arizona, regarding a First Amendment challenge to the town's regulation of outdoor signs.

The town requires a permit to erect a sign, with nineteen different exemptions including “Temporary Directional Signs Relating to Qualifying Event.”  The exemption for these temporary directional signs further specifies that such signs "shall be no greater than 6 feet in height and 6 square feet in area,”and “shall only be displayed up to 12 hours before, during and 1 hour after the qualifying event ends.”

There were other exemptions for ideological signs and for political (campaign) signs with different requirements. 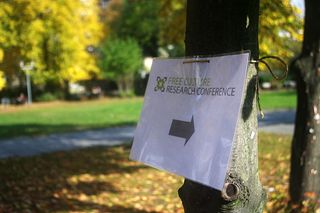 The Ninth Circuit upheld the regulatory scheme in a divided opinion, the second time the court had heard the controversy.  The majority reiterated its earlier conclusion that the regulation was content-neutral: it "does not single out certain content for differential treatment, and in enforcing the provision an officer must merely note the content-neutral elements of who is speaking through the sign and whether and when an event is occurring."

It held that "Supreme Court Precedent" affirmed its "definition of content-neutral" and in so doing the Ninth Circuit's February 2013 opinion relied in large part on Hill v. Colorado (2000).  The Ninth Circuit also relied on Hill's holding that the buffer zone at issue was constitutional and that "not all types of noncommercial speech need be treated the same;" this reliance may be less sturdy after the Court's decision last term in McCullen v. Coakley, in which the Court held a buffer zone unconstitutional.

In considering whether the differing restrictions between types of noncommercial speech in the various exemptions were “adequately justified without reference to the content of the regulated speech," the court concluded they were.  Moreover, the court found that the town was entitled to deference in its choices as to size and duration of the signs.

Dissenting, Judge Paul Watford argues that the town's scheme is content-based and unconstitutional.  Here's the gist of his reasoning:

The content-based distinctions [the town of ] Gilbert has drawn are impermissible unless it can identify some non-communicative aspect of the signs at issue to justify this differential treatment.  Gilbert has merely offered, as support for the sign ordinance as a whole, its interest in enhancing traffic safety and aesthetics. Traffic safety and aesthetics are certainly important interests. But to sustain the distinctions it has drawn, Gilbert must explain why (for example) a 20-square-foot sign displayed indefinitely at a particular location poses an acceptable threat to traffic safety and aesthetics if it bears an ideological message, but would pose an unacceptable threat if the sign’s message instead invited people to attend Sunday church services.

Gilbert has not offered any such explanation, and I doubt it could come up with one if it tried. What we are left with, then, is Gilbert’s apparent determination that “ideological” and “political” speech is categorically more valuable, and therefore entitled to greater protection from regulation, than speech promoting events sponsored by non-profit organizations. That is precisely the value judgment that the First and Fourteenth Amendments forbid Gilbert to make.

Oral argument promises to be a lively one full of hypotheticals; it has not yet been scheduled.

Listed below are links to weblogs that reference Supreme Court to Hear First Amendment Challenge to Sign Ordinance :