The Seventh Circuit panel enjoined the states from enforcing the laws and did not issue a stay.

Judge Richard Posner (pictured right) who is perhaps the most well-known judge not on the United States Supreme Court and who attracted attention with his comments at the oral argument, perhaps not surprisingly wrote the 40 page opinion. 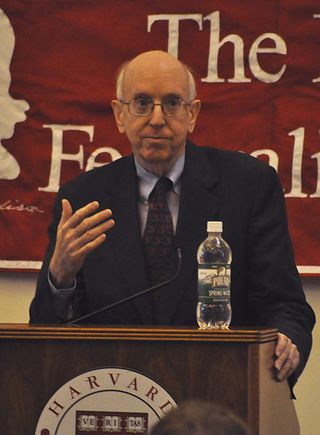 Posner begins by implying the state laws before the court are outliers:

Indiana and Wisconsin are among the shrinking majority of states that do not recognize the validity of same-sex marriages, whether contracted in these states or in states (or foreign countries) where they are lawful.

The panel's decision is based entirely on equal protection doctrine under the Fourteenth Amendment.  Here's Judge Posner introducing the concept that

comes wrapped, in many of the decisions applying it, in a formidable doctrinal terminology—the terminology of rational basis, of strict, heightened, and intermediate scrutiny, of narrow tailoring, fundamental rights, and the rest. We’ll be invoking in places the conceptual apparatus that has grown up around this terminology, but our main focus will be on the states’ arguments, which are based largely on the assertion that banning same-sex marriage is justified by the state’s interest in channeling procreative sex into (necessarily heterosexual) marriage.

However, Judge Posner's analysis draws heavily on his work in law and economics, implying that cost-benefit analysis deserves more attention that the "conventional approach"  - - - which "doesn’t purport to balance the costs and benefits of the challenged discriminatory law" - - - gives it.  For Posner:

Our pair of cases is rich in detail but ultimately straight- forward to decide. The challenged laws discriminate against a minority defined by an immutable characteristic, and the only rationale that the states put forth with any conviction— that same-sex couples and their children don’t need marriage because same-sex couples can’t produce children, intended or unintended—is so full of holes that it cannot be taken seriously. To the extent that children are better off in families in which the parents are married, they are better off whether they are raised by their biological parents or by adoptive parents. The discrimination against same-sex couples is irrational, and therefore unconstitutional even if the discrimination is not subjected to heightened scrutiny, which is why we can largely elide the more complex analysis found in more closely balanced equal-protection cases. 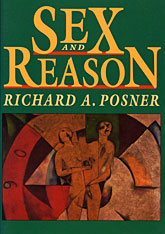 Judge Posner doesn't cite his own 1992 book, Sex and Reason, but he could have.  And the rhetorical style and much of the reasoning in this opinion echoes the book, which was widely debated.

If the cases go en banc or to the Supreme Court, it will be interesting to see if any of the law and economics rationales are prominent.

It is conceivable (just barely) that a cost-benefits analysis might be appropriate in the law of contracts, or torts (how much is your dead child worth compared to the jobs that will be lost if the law requires safer products?), if one imagines that the formulas invented by the Law and Economics scholars have any validity. But I cannot understand how such an approach would be sufficiently protective of fundamental constitutional rights. Utilitarianism supports individual rights only if honoring them results in maximum utility, and the measurement of utility in such contexts is problematic. When utility is framed in terms of economic values, the "analysis" loses all connection to values the Constitution was designed to protect. Shall we deny LGBT persons the right to marry? Let's get out our algorithms . . .