In a brief  Memorandum and Judgment  in Brown v Herbert federal district judge Clark Waddoups has finalized his conclusion - - - and made appealable - - - his previous decision that Utah's anti-bigamy statute is partially unconstitutional.

Recall that the Utah provision at issue criminalized bigamy as defined as including when a married person "purports to marry another person or cohabits with another person." 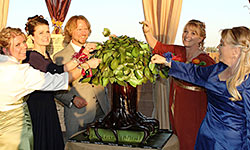 The challengers to the statute, the Browns, are famous from the reality program Sister Wives and the accompanying book.  The show includes "commitment ceremonies" between Cody brown and subsequent wives.   They are represented by ConLawProf Jonathan Turley who blogs about this judgment, including the possibilities of appeal, here.

It does seem that given the breadth of the statutory proscription on "bigamy" that includes  cohabitation, an appeal might be ill-advised.   A strict enforcement of the statute would mean that anyone whose divorce was not final and who cohabited with another person might be guilty of bigamy.

Listed below are links to weblogs that reference Utah District Judge Finalizes Judgment on Unconstitutionality of Polygamy Prohibition :