In his essay Justice Clarence Thomas's Korematsu Problem, forthcoming in Harvard Journal of Racial & Ethnic Justice and available on ssrn, ConLawProf Mark Kende suggests that Justice Thomas actually endorses one of the most reviled Supreme Court opinions, Korematsu v. United States (1944), in which the Court upheld the internment of citizens of Japanese ancestry even as it noted that race-based classifications deserved strict scrutiny. 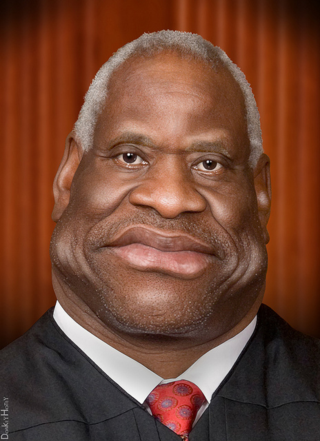 Caricature of Justice Thomas by Donkey Hotey via

Kende focuses on Thomas's dissents in Hamdi v. Rumsfeld (2004) and Johnson v. California (2005) to argue that Thomas's views are consistent with a Korematsu-approving jurisprudence in which government power to enact security concerns trumps color-blindness principles.

Worth a read as we consider executive power and questions of nationality and race in the news.

Listed below are links to weblogs that reference Daily Read: Kende on Thomas and Korematsu: