Can City of Ocala Ban the Saggy Pants Style on Government Property?

This summer, the city of Ocala, Florida passed Ordinance 2014-44 , prohibiting the style of saggy pants on city property.  Tonight, the city officials will reconsider the ordinance in light of threatened legal action.

Ocala is not the first municipality to try to ban the style.  But these bans have constitutional issues.  While First Amendment challenges of free expression have not been successful on the grounds that the style does not convey the necessary particularized message,  challenges based on substantive due process do have merit.

The ordinances generally state as their purposes "decency" and "morals," but there is a problem prohibiting showing underwear.  Here's the language from the Ocala ordinance:

It is unlawful for any person, while on city owned property, to knowingly or intentionally wear pants below the person's natural waistline in a manner that leaves the person's underwear or bare buttocks exposed. A person's underwear is "exposed" if, when measured vertically, more than two inches of it is visible. A person's bare buttocks is "exposed"person's intergluteal cleft is visible.

As a judge from another Florida city - - - Riveria Beach - - - held, such a ban violates basic liberty interests under the due process clause.  As for the "intergluteal cleft" being visible, there are real questions whether that can constitutionally be included in "indecent exposure."

It is oft-stated that "saggy pants" are a foolish style.  But fashions, of course, change.  In a 1937 case, People v. O’Gorman, 274 N.Y. 284, 8 N.E.2d 862 (1937),  New York’s highest court struck down a Yonkers ordinance that prohibited any person over the age of 16 from appearing in public “in a bathing costume” or “in other than customary street attire.”   The defendants included a woman who wore “white sandals, no stockings, yellow short pants and a colored halter, with a yellow jacket over it and no hat”  and a man who “had on white sneakers, white anklets, short socks, yellow trunks, short pants, a blue polo shirt, brown and white belt, no hat.”  Maybe they looked “foolish” to their contemporaries, but as the court declared, the “Constitution still leaves some opportunity for people to be foolish if they so desire.”

Moreover, it's important to be attentive to the equal protection problems that the criminalization of saggy pants raises.

There is more discussion and analysis of saggy pants bans and the limits of criminalizing indecent exposue in Dressing Constitutionally (Cambridge University Press, 2013). 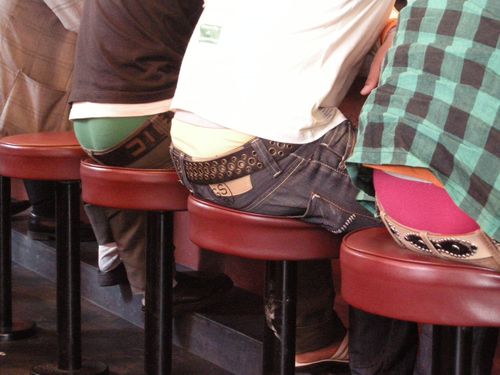 Listed below are links to weblogs that reference Can City of Ocala Ban the Saggy Pants Style on Government Property?: