Seattle - - - a "progressive and expensive city" - - - "struck a blow against rising income inequality" by raising its municipal minimum wage to $15 per hour earlier this month, as Maria La Ganga reported in the LA Times. Seattle Ordinance 12449 becomes effective in 2015, with a phase-in schedule of pay rates dependent on type of employer.   But it has already been challenged as unconstitutional. 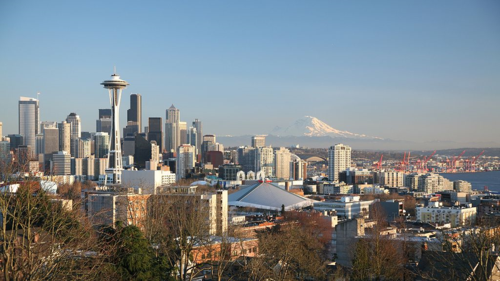 skyline of Seattle via

A central issue in this complaint is the Ordinance's definitions of schedule 1 and schedule 2 employers as the definitions relate to franchises.  As paragraph 50 provides:

The Ordinance provides that, for purposes of determining whether an employer is a Schedule 1 or Schedule 2 employer, “separate entities that form an integrated enterprise shall be considered a single employer ... where a separate entity controls the operation of another entity,” but this test applies only to a “non-franchisee employer.” Under the Ordinance, if a small franchisee is associated with a franchise network that employs more than 500 workers, the small franchisee is deemed a Schedule 1 Employer even if it is not part of an “integrated enterprise” as so defined.

Filed by Bancroft LLC and signed by Paul Clement, the pleading contains various arguments detailing why such a distinction is unconstitutional, largely revolving around the competitive disadvantage the ordinance will place on franchised and parent businesses by requiring higher wages.

LawProf David Ziff of University of Washington School of Law in Seattle has some helpful discussions of the complaint on his blog, including an overview and a specific discussion of the "classes of corporations" argument under the state constitution's privileges or immunities clause.

Certainly this is litigation to watch.  And certainly cities across the United States that are considering similar measures will be looking closely.  Cities are often rightly concerned with state constitutional powers of "home rule" allowing municpalities to vary from the state mandated wage; for example,  the courts declared the 1964 attempted minimum wage raise from 1.25 to 1.50 in NYC to be beyond the powers of the city. But the Seattle challenge raises federal constitutional issues that are necessarily obvious.

Listed below are links to weblogs that reference Seattle's Minimum Wage Challenged in Federal District Court: