Recall that Carol Anne Bond was convicted of a crime in violation of the Chemical Weapons Implementation Act, 18 U.S.C. § 229(a), passed to implement a treaty , the Chemical Weapons Convention. But the fact that she is not a "terrorist," but rather a "vengeful" participant in a "love triangle" has caused much consternation.  While the international arms-control agreement prohibits nation-states from producing, stockpiling, or using chemical weapons, Bond, a biologist, used her expertise to spread injurious chemicals on the property of her former best friend, after learning that the friend was pregnant by Bond’s husband.   Although Bond was prosecuted in state court, she continued her campaign against her former friend and she was eventually prosecuted in federal court.

Recall that in 2011, the Court unanimously held that Bond could raise a Tenth Amendment claim in her prosecution, reversing the Third Circuit. On remand, the Third Circuit rejected Bond's argument to  "set aside as inapplicable the landmark decision Missouri v. Holland, 252 U.S. 416 (1920), which is sometimes cited for the proposition that the Tenth Amendment has no bearing on Congress's ability to legislate in furtherance of the Treaty Power in Article II, § 2 of the Constitution."

Today's opinion in Bond v. United States again reverses the Third Circuit.  The focus in oral argument  was on the Treaty power and whether a treaty can alter constitutional structures, namely federalism.  And while today's decision is unanimous, there are multiple concurring opinions.

The opinion for the Court, authored by Chief Justice Roberts, and joined by Justices Kennedy, Ginsburg, Breyer, Sotomayor, and Kagan, is a relatively brief 21 pages and notes that the Bond's case is "unusual" and thus the "analysis is appropriately limited."  For the Court,

the global need to prevent chemical warfare does not require the Federal Government to reach into the kitchen cupboard, or to treat a local assault with a chemical irritant as the deployment of a chemical weapon. There is no reason to suppose that Congress—in implementing the Convention on Chemical Weapons—thought otherwise.

Essentially, the Court practices constitutional avoidance by construing the statute narrowly; there is no need to confront Holland v. Missouri's holding regarding the constitutional parameters of Congress's treaty power.

Indeed, the Court only mentions Holland in its discussion of the Third Circuit's holding and Bond's arguments; it notes that notwithstanding that "debate" there is a "well-established principle" of constitutional avoidance and includes a citation to Ashwander v. TVA, 297 U. S. 288, 347 (1936) (Brandeis, J., concurring). Because "Bond argues that section 229 does not cover her conduct" it considers "that argument first," and finds it decides the issue. 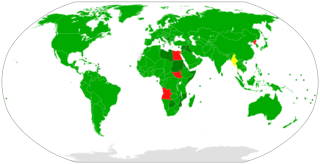 Nations in green are signatories to
Chemical Weapons Convention via

Justice Scalia, concurring and joined by Thomas, would conclude that the statute clearly covers Bond's Act and therefore is unconstitutional.  Justice Thomas writes a separate concurrence, joined by Scalia and in part by Alito, writes separately to "suggest that the Treaty Power is itself a limited federal power."  And in a very brief opinion, Alito argues that the "insofar as the Convention may be read to obligate the United States to enact domestic legislation criminalizing conduct of the sort at issue in this case, which typically is the sort of conduct regulated by the States, the Convention exceeds the scope of the treaty power" and thus the statute "lies outside Congress’ reach unless supported by some other power enumerated in the Constitution."

So, while the opinion is "unanimous," the three Justices considered to be the most conservative and perhaps most hostile to international law, would have limited Congress' power to implement treaties made pursuant to Article II §2 allowing the executive to "make Treaties, provided two thirds of the Senators present concur."

And for ConLawProfs, it demonstrates the relevance of the "Ashwander doctrine" as a part of constitutional law courses.