The so-called "tenure statutes" challenged in the action are provisions of California's Education Code governing teacher employment, including

The California constitutional provisions at issue include the state's equal protection clause in Article I §7, and the Article IX provisions relating to Education, including the "general diffusion of knowledge" section, §1 and the requirement that the legislature "shall provide for a system of common schools by which a free school shall be kept up and supported,"§5. 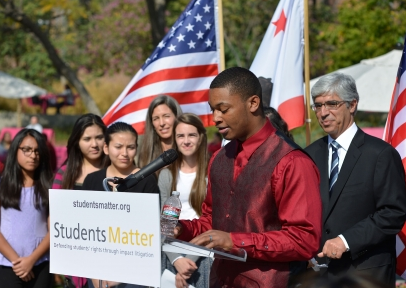 Judge Treu based his decision largely on equality grounds, but noted that the California Supreme Court had previously held education to be a fundamental right.  Importantly, the judge found that the trial showed that "there are a significant number of grossly ineffective teachers currently active in California classrooms."  Judge Treu also found, although did not elaborate, that there was a "disproportionate impact on poor and minority students."  The judge applied strict scrutiny to the challenged statutes.

As to the permanent employment statute,  Judge Treu found that it disadvantaged both students and teachers, noting that California's short time frame for tenure - - - less than two years - - - was an outlier: the vast majority of states (32) have a three year time frame.

Regarding the dismissal statutes, Judge Treu noted that dismissal of a teacher could take two to ten years and "cost $50,000 to $450,000," and that while due process for teachers was an "entirely legitimate issue" these statutes provided "uber due process."  The judge found that the provisions were "so complex, time consuming and expensive" that the statutes violated the state constitutional equal protection rights of the student plaintiffs.

Likewise, Judge Treu found that the LIFO statute violated the state constitutional equal protection rights of the student plaintiffs.  Judge Treu again noted that California was in a distinct minority of 10 states in which this seniority system was absolute and allowed no consideration of teacher effectiveness, with 20 states providing that seniority was a factor, and 19 states leaving the decision to the discretion of government.

Judge Treu's relatively brief decision followed a rather high profile trial financed by a tech entrepreneur.  The opinion does not have a full discussion of the facts, especially those supporting the impact on poor and racial minority students.

Vergara is heir to cases such as San Antonio School District v. Rodriguez (1973),  in which the United States Supreme Court rejected a challenge to school financing as disadvantaging students of color, and Edgewood Independent School District v. Kirby, in which the Texas Supreme Court found the school financing scheme unconstitutional under the state constitution, including a "general diffusion of knowledge" provision.   Yet Vergara turns the focus from state resources to "bad teachers" and can tap into anti-teacher and anti-union and anti-government worker sentiments.

Judge Treu concludes his decision with an invocation of Alexander Hamilton's Federalist Paper 78 on separation of powers, noting that it is not the task of the judiciary to advise the legislature on a solution.  But as the history of  Texas' Edgewood Independent School District v. Kirby demonstrates, legislative solutions in school equality can have an extended career in the courts.

Most likely, Judge Treu's Vergara decision will itself be subject to further judicial interpretations in the appellate process.