In a relatively brief  opinion in Wood v. Moss, Justice Ginsburg, writing for a unanimous Court, reversed the Ninth Circuit and held that Secret Service officers had qualified immunity in a First Amendment challenge based on viewpoint discrimination against anti-Bush demonstrators.

Recall that the challenge in Wood v. Moss involved an allegation that the Secret Service removed anti-Bush protestors to a location farther from the then-President while he ate dinner while allowing pro-Bush demonstrators to remain in their location. 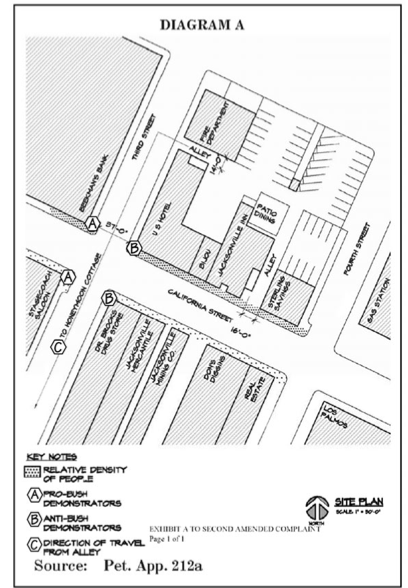 The Court decided that any viewpoint discrimination was not the "sole" reason for the change in location and thus the agents had qualified immunity.  The Court agreed with the agents that the map provided by the protesters, and included in the Court's opinion [image at right]

The Court rejected the protestors arguments, including the White House Manual that stated that protestors should be designated to zones "preferably not in view of the event site" and that Secret Service agents have engaged in viewpoint discrimination in the past.  Here, however, the Court stressed that "this case is scarcely one in which the agents acted 'without a valid security reason.'"  Emphasis in original, quoting from Brief.

While reaffirming that a Bivens action "extends to First Amendment claims" - - - a question at oral argument - - - the Court nevertheless noted that individual government officials cannot be held liable in a Bivens suit unless they themselves acted unconstitutionally:

We therefore decline to infer from alleged instances of misconduct on the part of particular agents an unwritten policy of the Secret Service to suppress disfavored expression, and then to attribute that supposed policy to all field- level operatives.

A good "unanimous" decision. Seems that the Court is being clear and consistent.