Joining a decided trend which we last discussed here and here, today Oregon District Judge Michael McShane declared unconstitutional the state’s same-sex marriage prohibition in Article 15 of the state constitution. Judge McShane’s 26 page  opinion in Geiger v. Kitzhaber concludes that because “Oregon’s marriage laws discriminate on the basis of sexual orientation without a rational relationship to any legitimate government interest, the laws violate the Equal Protection Clause of the Fourteenth Amendment to the United States Constitution.” 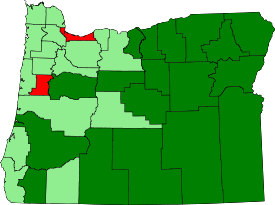 voting in 2004 ballot measure defining marriage as man/woman only: red is no; green is yes; dark green is yes by 2/3 or more; via

Judge McShane noted that the state defendants “concede that Oregon's marriage laws banning same-gender marriage are unconstitutional and legally indefensible, but state they are legally obligated to enforce the laws until this court declares the laws unconstitutional,” and thus, the case “presents itself to this court as something akin to a friendly tennis match rather than a contested and robust proceeding between adversaries.”  However, McShane did not find (or analyze) any Article III “case or controversies” issues, or address standing (including defendant standing).

may be distinguished from the present case in several respects. Yet, recounting such differences will not detract from the underlying principle shared in common by that case and the one now before me. The principle is one inscribed in the Constitution, and it requires that the state's marriage laws not "degrade or demean" the plaintiffs in violation of their rights to equal protection.

Unlike Justice Kennedy’s opinion for the Court in Windsor, however, Judge McShane’s opinion in Geiger is quite specific regarding the level of scrutiny being applied: rational basis.  McShane rejected two arguments for intermediate scrutiny.  First, he rejected the argument based upon a gender classification, concluding that the “targeted group here is neither males nor females, but homosexual males and homosexual females” and thus the state's marriage laws discriminate on the basis of sexual orientation, not gender.  Second, he rejected the applicability of the Ninth Circuit’s opinion in SmithKline Beecham Corp. v. Abbott Labs, reasoning that the panel's decision in SmithKline is not yet a truly final and binding decision given that the mandate has not issued pending en banc review. (Recall that last week, a federal district judge in Idaho found "SmithKline’s examination of Windsor is authoritative and binding").

Judge McShane then engaged in the by now familiar analysis of government interests - - - including protecting traditional marriage and promoting responsible procreation - - - and their relationship to the same-sex marriage prohibition.  Like his fellow judges in recent cases, Judge McShane found rational basis is not satisfied.

And like some of his fellow judges, McShane shared his personal perspective.  McShane's provided his in an extended conclusion:

I am aware that a large number of Oregonians, perhaps even a majority, have religious or moral objections to expanding the definition of civil marriage (and thereby expanding the benefits and rights that accompany marriage) to gay and lesbian families. It was these same objections that led to the passage of Measure 36 in 2004 [the ballot measure defining marriage as only between a man and a woman]. Generations of Americans, my own included, were raised in a world in which homosexuality was believed to be a moral perversion, a mental disorder, or a mortal sin. I remember that one of the more popular playground games of my childhood was called "smear the queer" and it was played with great zeal and without a moment's thought to today' s political correctness. On a darker level, that same worldview led to an environment of cruelty, violence, and self-loathing. It was but 1~86 when the United States Supreme Court justified, on the basis of a"millennia of moral teaching," the imprisonment of gay men and lesbian women who engaged in consensual sexual acts. Bowers, 478 U.S. at 197 (Burger, C.J., concurring), overruled by Lawrence, 539 U.S. at 578. Even today I am reminded ofthe legacy that we have bequeathed today's generation when my son looks dismissively at the sweater I bought him for Christmas and, with a roll of his eyes, says "dad ... that is so gay."

It is not surprising then that many of us raised with such a world view would wish to protect our beliefs and our families by turning to the ballot box to enshrine in law those traditions we have come to value. But just as the Constitution protects the expression of these moral viewpoints, it equally protects the minority from being diminished by them.

It is at times difficult to see past the shrillness of the debate. Accusations of religious bigotry and banners reading "God Hates Fags" make for a messy democracy and, at times, test the First Amendment resolve of both sides. At the core of the Equal Protection Clause, however, there exists a foundational belief that certain rights should be shielded from the barking crowds; that certain rights are subject to ownership by all and not the stake hold of popular trend or shifting majorities.

My decision will not be the final word on this subject, but on this issue of marriage I am struck more by our similarities than our differences. I believe that if we can look for a moment past gender and sexuality, we can see in these plaintiffs nothing more or less than our own families. Families who we would expect our Constitution to protect, if not exalt, in equal measure. With discernment we see not shadows lurking in closets or the stereotypes of what was once believed; rather, we see families committed to the common purpose of love, devotion, and service to the greater community.

Where will this all lead? I know that many suggest we are going down a slippery slope that will have no moral boundaries. To those who truly harbor such fears, I can only say this: Let us look less to the sky to see what might fall; rather, let us look to each other ... and rise.