In a sharply divided opinion today in Town of Greece v. Galloway, the United States Supreme Court has decided that religious prayers at the beginning of a town board meeting do not violate the Establishment Clause.

Recall that the Second Circuit had concluded that the Town of Greece's practice of prayer since 1999 "impermissibly affiliated the town with a single creed, Christianity." At oral argument, the discussion centered on an application of Marsh v. Chambers (1983), in which the Court upheld the constitutionality of the Nebraska legislature's employment of a chaplain to lead a legislative prayer, and the question of whether the "town board" a "hybrid" body making adjudicative findings as well as engaging in legislative acts.  Recall also that the Obama administration filed an amicus brief in support of the Town of Greece. 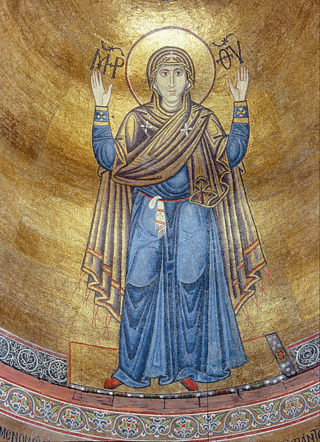 The Virgin Orans ("praying" in Greek) via

Writing for the majority - - - except for Part II-B in which Justices Scalia and Thomas did not join - - - Justice Kennedy concluded that there was no Establishment Clause violation based upon Marsh v. Chambers.  First, the majority opinion held that Marsh v. Chambers does not require nonsectarian or ecumenical prayer.  Instead, it is acceptable that while a

number of the prayers did invoke the name of Jesus, the Heavenly Father, or the Holy Spirit, but they also invoked universal themes, as by celebrating the changing of the seasons or calling for a “spirit of cooperation” among town leaders.

Absent a pattern of prayers that over time denigrate, proselytize, or betray an impermissi­ ble government purpose, a challenge based solely on the content of a prayer will not likely establish a constitutional violation. Marsh, indeed, requires an inquiry into the prayer opportunity as a whole, rather than into the con­tents of a single prayer.

In the plurality section, Justice Kennedy rejected the relevance of the "intimate setting of a town board meeting" to a finding that the prayer "coerces participation by nondaherents."  Rather, the principle audience for the prayers "is not, indeed, the public but lawmakers themselves."  The analysis, Kennedy writes, "would be different if town board members directed the public to participate in the prayers, singled out dissidents for opprobrium, or indicated that their decisions might be influenced by a person's acquiescence in the prayer opportunity."

Justices Thomas and Scalia did not join Part II-B; they essentially reject the coercion test ("peer pressure, unpleasant as it may be, is not coercion").  Justice Thomas also (as he has done in the past) rejects the incorporation of the Establishment Clause to the states, and certainly to a municipality.

In the major dissent authored by Justice Kagan - - - joined by Justices Ginsburg, Breyer (who also authored a separate dissent) and Sotomayor - - -the emphasis is on the factual record.  Kagan distinguishes Marsh v. Chambers and argues the situation in the Town of Greece is outside its "protective ambit."

the chaplain of the month stands with his back to the Town Board; his real audience is the group he is facing— the 10 or so members of the public, perhaps including children. And he typically addresses those people, as even the majority observes, as though he is “directing [his] congregation.”  He almost always begins with some version of “Let us all pray to­ gether.”  Often, he calls on everyone to stand and bow their heads, and he may ask them to recite a common prayer with him.  He refers, constantly, to a collective “we”—to “our” savior, for example, to the presence of the Holy Spirit in “our” lives, or to “our brother the Lord Jesus Christ.”  In essence, the chaplain leads, as the first part of a town meeting, a highly intimate (albeit relatively brief) prayer service, with the public serving as his congregation.

Further, Justice Kagan writes, "no one can fairly read the prayers from Greece’s Town meetings as anything other than explicitly Chris­tian—constantly and exclusively so."   Because of these practices, she concludes, the Town of Greece has "betrayed" the "promise" of the First Amendment: "full and equal membership in the polity for members of every religious group."

The Supreme Court's divided opinion illustrates that religion in the town square - - - or the town board meeting - - - remains divisive.

Listed below are links to weblogs that reference Divided Supreme Court Finds Town Board Prayer Does Not Violate Establishment Clause: