ConLawProf Sheryll Cashin's new book, Place Not Race: A New Vision of Opportunity in America is just out. In it, Cashin looks at the demise of affirmative action presaged by Supreme Court cases such as this Term's Schuette and last Term's Fisher v. UT, and argues that substituting "place" for "race" in diversity admissions "will better amend the structural disadvantages endured by many children of color, while enhancing the possibility that we might one day move past the racial resentment that affirmative action engenders."

Here's a bit from a longer excerpt on abc:

Race-based affirmative action buys some diversity for a relative few, but not serious inclusion. It doesn’t help to build a movement to attack underlying systems of inequality that are eating away at the soul of our nation. Among other transformations, we need corporations that share more profits with workers and pay them equitably. We need a financial system that doesn’t exploit average people. We need governments that invest wisely in pre-K-12 education and the nonselective higher education that at least half of high school graduates attend. We also need government that does not over-incarcerate high school dropouts of all colors. 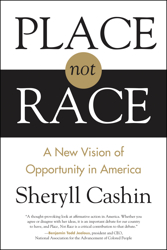 Cashin contends that "race" is both over-inclusive and under-inclusive, an analysis that will be familiar to anyone in the affirmative action cases employing strict scrutiny.  But Cashin's slant is different.  For Cashin, it isn't necessarily that we are post-racial.  Instead, "given our nation’s failure to live up to Brown, we have an obligation to acknowledge and ameliorate the injustices of segregation—a moral imperative more important than diversity itself."

An interesting read for anyone considering affirmative action, race, and equality.

Listed below are links to weblogs that reference Daily Read: Sheryll Cashin's "Place Not Race":