The prize honors a work of scholarship - - - book or article - - - that explores the tension between civil liberties and national security in contemporary American society.

"The $10,000 prize is designed to encourage and reward public debate among scholars on current issues affecting the rights of individuals and the responsibilities of governments throughout the world."

Last year's prize-winner was The Counterinsurgent's Constitution: Law in the Age of Small Wars (Oxford University Press 2012) by Ganesh Sitaraman. 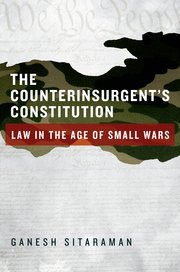