Does a city policy governing "extended use" of school facilities that excludes permits for the "purpose of holding religious worship services, or otherwise using a school as a house of worship" violate the First Amendment?

The Second Circuit in its opinion in Bronx Household of Faith v. Board of Education of the City of New York answered in the negative, a majority of the panel holding that the policy, Regulation I.Q., does not violate either the Free Exercise Clause or the Establishment Clause. 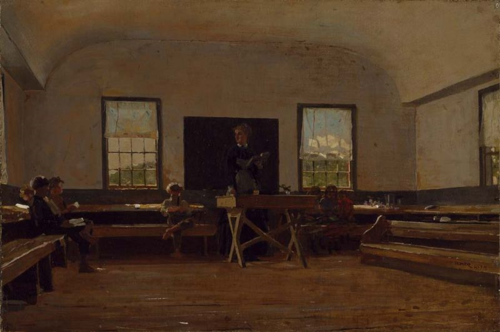 Country School by Winslow Homer circa 1873 via

Today's opinion  - - - Bronx Household V - - - reverses the district judge's grant of an injunction on Free Exercise claims which were arguably not before the courts previously.  The majority of the Second Circuit panel, in an opinion by Judge Pierre Leval joined by Guido Calabresi, carefully refuted the district judge's reasoning.  In short, the panel majority held that Locke v Davey, 540 U.S. 712 (2004) (finding that the exclusion of devotional theology degree programs from eligibility for state scholarships does not violate Free Exercise Clause) was more apposite than Church of the Lukumi Babalu Aye, Inc. v. City of Hialeah, 508 U.S. 520 (1993)(holding that an ordinance "targeting" the Santeria practice of animal sacrifice merited strict scrutiny and violated the Free Exercise Clause).

The panel rejected the argument that the Regulation I.Q. targets religion generally or targets religions that have worship services.  The panel also rejected the attempt to distinguish the scholarship in Locke v, Davey, noting that under the "extended use" policy, the city subsidizes the use of school facilities since the organizations can use the facilities without cost.  The panel also found that the city's desire not to violate the Establishment Clause was a valid one.  As the panel summarized:

In view of (1) the absence of discriminatory animus on the part of the Board against religion, or against religions that conduct worship services; (2) the bona fides and the reasonableness of the Board’s concern that offering school facilities for the subsidized conduct of religious worship services would create a substantial risk of incurring a violation of the Establishment Clause claim; and (3) the fact that the Board’s policy (a) leaves all persons and religions free to practice religion without interference as they choose, (b) treats all users, whether religious or secular, in identical fashion, and (c) imposes no burden on any religion, leaving all free to conduct worship services wherever they choose other than the Board’s schools; as well as the other reasons recited in this opinion and in Bronx Household IV, we conclude that Reg. I.Q. does not violate Plaintiffs’ rights to free exercise of religion, whether or not it is subject to strict scrutiny.

As to the Establishment Clause, the court rejected Bronx Household's argument that for the city to determine what constituted "religious worship services" would infringe the Establishment Clause.  Bronx Household relied upon Hosanna-Tabor Evangelical Lutheran Church & Sch. v. E.E.O.C., 132 S. Ct. 694 (2012) - - - an example of how doctrine has been changing during this protracted litigation - - - but the majority expressed a very different view:

Hosanna-Tabor, moreover, does not merely fail to support Bronx Household’s claim of Establishment Clause violation due to excessive entanglement by the Board; it actively contradicts the argument. This is because in Hosanna-Tabor the Supreme Court itself did precisely what the District Court found a governmental entity prohibited from doing.

In other words, when the United States Supreme Court "undertook to make its own determination whether the plaintiff was a minister subject to the ministerial exception," it engaged in the very same type of determination that Bronx Household argues would violate the Establishment Clause.

If Senior Judge John Walker, dissenting, has his way, the Court might have a chance to discuss this Establishment Clause rationale again.  Walker contends that this "case presents substantial questions involving the contours of both religion clauses and the Free Speech Clause of the First Amendment, the resolution of which are ripe for Supreme Court review."  Most certainly, Bronx Household will be quoting that language in any petition seeking Supreme Court review.

Listed below are links to weblogs that reference Second Circuit Holds NYC Can Ban Religious Services in School Buildings:

Check out: http://nyti.ms/1kldCTA for a different take (factually, at any rate) on religion and public schools....