In its opinion National Legal Services v. India, the Supreme Court of India has recognized the constitutional rights of transgender persons, including the right not to be denominated as either "male" or "female."

The opinion by K.S. Radhakrishnan begins with an invocation of the "trauma, agony and pain which the members of Transgender community undergo" but rather quickly also invokes the cultural roots and importance of the community: "TG Community comprises of Hijras, eunuchs, Kothis, Aravanis, Jogappas, Shiv-Shakthis etc. and they, as a group, have got a strong historical presence in our country in the Hindu mythology and other religious texts." 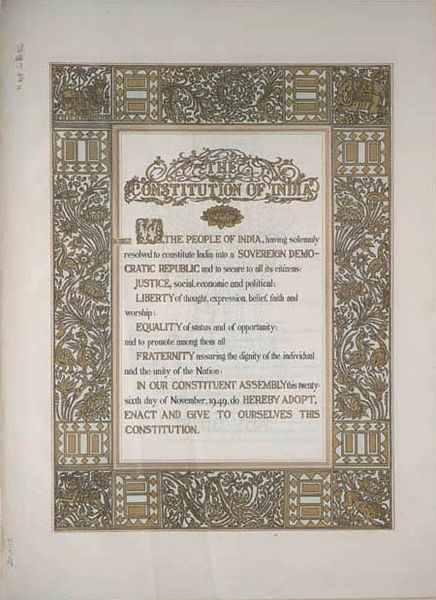 The judgment rests on an interpretation of several provisions of the Constitution of India, including Article 14 (equality before law); Article 15 (prohibition of discrimination on the basis of various grounds, including sex); Article 16 (equality of opportunity in public employment, including sex); Article 19 (including freedom of expression); and Article 21 (protection of life and personal liberty).  The judgment engaged in some originalist reasoning that broadly interpreted "sex" to include sex-stereotyping:

Constitution makers, it can be gathered, gave emphasis to the fundamental right against sex discrimination so as to prevent the direct or indirect attitude to treat people differently, for the reason of not being in conformity with stereotypical generalizations of binary genders. Both gender and biological attributes constitute distinct components of sex. Biological characteristics, of course, include genitals, chromosomes and secondary sexual features, but gender attributes include one’s self image, the deep psychological or emotional sense of sexual identity and character. The discrimination on the ground of ‘sex’ under Articles 15 and 16, therefore, includes discrimination on the ground of gender identity. The expression ‘sex’ used in Articles 15 and 16 is not just limited to biological sex of male or female, but intended to include people who consider themselves to be neither male or female.

Given this interpretation, the Court not suprisingly ruled

We, therefore, conclude that discrimination on the basis of sexual orientation or gender identity includes any discrimination, exclusion, restriction or preference, which has the effect of nullifying or transposing equality by the law or the equal protection of laws guaranteed under our Constitution, and hence we are inclined to give various directions to safeguard the constitutional rights of the members of the TG community.

The Court has some interesting discussions of dress and grooming as an aspect of gender which included references to US cases and is further discussed here.

The Court also specifically disavowed any relationship between its present judgment in National Legal Services v. India and the controversial opinion Koushal v. NAZ Foundation decided in December in which the Court - - - or as the Court states here "A Division Bench of this Court" reversed the 2009 decision of the Delhi High Court that §377 of the Indian Penal Code was unconstitutional under the India Constitution and upheld India's sodomy law as constitutional:

we express no opinion on it [Kousal] since we are in these cases concerned with an altogether different issue pertaining to the constitutional and other legal rights of the transgender community and their gender identity and sexual orientation.

In a separate judgment, A.K. Sikiri did not mention the sodomy decision in Koushal v. Naz Foundation, but the judgment's expansive rhetoric could be read as an implicit disagreement with that decision as well as serving as a further butressing of today's judgment.  The concurring opinion elaborated on the importance of TG persons and communities to India's culture. It referenced Immanuel Kant, John Rawls, Amartya Sen as providing the "jurisprudential basis for doing justice to the Vulnerable Groups which definitely include TGs."  It explicitly stated the "dynamic" and "living character" of the Constitution and its interpretation.  It considered judicial review in the context of democracy (including, implicitly, "sexual democracy") and decidedly opined that it is the role of the judiciary to "ensure access to justice to the marginalized section of the society," and that undoubtedly "TGs belong to the unprivileged class which is a marginalized section."

The judgment not only requires the government to recognize a "third gender" and to grant "legal recognition of their gender identity such as male, female or as third gender," but also directs the government to take positive steps in education, health provisions, and "seriously address" various problems.

Listed below are links to weblogs that reference India's Supreme Court Recognizes Transgender Constitutional Rights of Equality as "Third Gender":