Daily Read: E-Book by Collins and Skover on McCutcheon and Campaign Finance 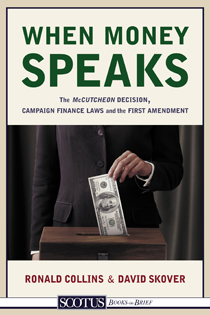 Published on the same day that the Court rendered its 5-4 decision in McCutcheon v. Federal Election Commission,  When Money Speaks: The McCutcheon Decision, Campaign Finance Laws, and the First Amendment is an ebook by ConLawProfs Ron Collins and David Skover.

A taste of the authors' analysis is apparent in their "foreward" to the SCOTUSblog symposium on the case, "It's all forward now."  They write that in "the past eight years, since Chief Justice John Roberts and Justice Samuel Alito have been on the Court, the Justices have handed down six First Amendment campaign finance opinions" all of which have declared a campaign finance regulation unconstitutional under the First Amendment, and five of which were 5-4 decisions. They also provide some "takeaways" from the opinion.

The book will certainly be a must-read for anyone interested in campaign finance and the First Amendment.

Listed below are links to weblogs that reference Daily Read: E-Book by Collins and Skover on McCutcheon and Campaign Finance: