"The amount of data available to law enforcement creates a type of honey pot—a trap that lures and tempts government to use data without limits."  What should the constitutional limits be?  And what is their source?  In a new article, Constitutional Limits on Surveillance: Associational Freedom in the Age of Data Hoarding, available on ssrn (and forthcoming in Notre Dame Law Review) Law Prof Deven Desai  (pictured) argues that constitutional protections for association - - - rooted in the Fourth Amendment as well as the First - - - is a method for disciplining governmental access to both forward and backward-looking surveillance in our current age of "data hoarding." 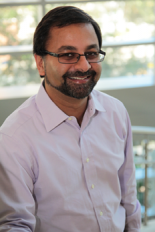 The mechanisms for information gathering have taken different forms at different times in history, but regardless of the precise method or when the acts occur, we can see the goal: suppression of association. Mail has been read, student speech and political actions watched, library records obtained, membership in the Communist Party scrutinized, a list of individuals to detain in case of a national security emergency created, a fifteen year program to gather information about “the Communist Party, the Ku Klux Klan, antiwar groups, civil rights groups, women’s rights groups, and gay rights groups” created, and civil rights leader Martin Luther King threatened depending on various perceived threats and surveillance programs. These practices now include the FBI’s gathering of publicly available information “directly,” through third parties, or if handed over “voluntarily” by third parties.  The NSA’s recent activities map to the same behaviors that threaten and attack associational freedom. The NSA has targeted online activities of alleged Muslim radicalizers—those who offer troubling speeches—to secure information, such as about viewing pornography online, to discredit or embarrass the speakers. That tactic is not about law enforcement. Just as those in power have gone after the Democratic-Republican Societies, war protestors, civil rights activists, and others questioning the government, the tactic is about intimidation and suppression. One might try and argue that all this activity is only for national security and anti-terror investigations and thus permitted under current laws. But NSA activities have not been cabined to national security interests. The NSA is not allowed to spy on domestic targets. It has done so anyway. The NSA’s “Associational Tracking Program” has collected purely domestic communication information including from and to whom a call is made, the length of the call, and when the call is made, on a daily basis for later analysis by the NSA. This data has come directly from telecommunication providers such as Verizon, which complied with a court order. 165 In addition, the NSA has hacked telecommunication lines to gain access to communications and metadata passing through Google and Yahoo data centers.

Ultimately, Desai contends that "pervasive surveillance turns us into sheep."  But the First Amendment has not been sufficient to protect against surveillance because a "mypoic" view of the First Amendment as requiring expressive speech misses the associational aspects at stake.  Additionally, the associational aspects of the Fourth Amendment are often neglected, but should be considered "core."

Given the continuing revelations about widespread surveillance, Desai's intervention and suggested reorientation of doctrine is certainly worth a serious read.

Listed below are links to weblogs that reference Daily Read: Deven Desai on Data Hoarding and Associational Freedom: