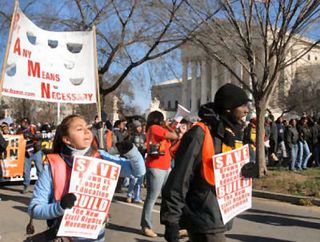 The state constitutional amendment was a reaction to the Court's opinion in Grutter v. Bollinger (2003), upholding the University of Michigan Law School's use of diversity in admissions.  But since Grutter, the Court has been decidely less friendly to affirmative action, as in  Fisher v. University of Texas.

Recall that the en banc Sixth Circuit majority had relied upon the so-called "political process" aspect of the Equal Protection Clause which asks whether a majority may vote to amend its constitution to limit the rights of a minority to seek relief, relying on Washington v. Seattle Sch. Dist. No. 1, 458 U.S. 457 (1982) and Hunter v. Erickson, 393 U.S. 385 (1969).  At oral arguments, the Justices had seemed hostile to that theory.

Justice Kennedy's plurality opinion for the Court carefully rehearses the cases, but it is probably his rhetoric that is most noteworthy:

This case is not about how the debate about racial preferences should be resolved. It is about who may resolve it. There is no authority in the Constitution of the United States or in this Court’s precedents for the Judiciary to set aside Michigan laws that commit this policy determination to the voters.

It is Justice Sotomayor's dissent, joined by Justice Ginsburg, that displays the most heft.  At more than 50 pages and almost as lengthy as all the other opinions combined, Sotomayor's opinion is an extended discussion of equal protection doctrine and theory, as well as the function of judicial review.  In her last section, she also addresses the "substantive policy" of affirmative action and the difference it makes.

The stark division among the Justices is clear.  Sotomayor writes that "race matters."  Scalia reiterates that the constitution is "color-blind."  Roberts implies that racial "preferences do more harm than good."  And Kennedy invokes a First Amendment right to debate race:

Here Michigan voters acted in concert and statewide to seek consensus and adopt a policy on a difficult subject against a historical background of race in America that has been a source of tragedy and persisting injustice. That history demands that we continue to learn, to listen, and to remain open to new approaches if we are to aspire always to a constitutional order in which all persons are treated with fairness and equal dignity. . . . The respondents in this case insist that a difficult question of public policy must be taken from the reach of the voters, and thus removed from the realm of public discussion, dialogue, and debate in an election campaign. Quite in addition to the serious First Amendment implications of that position with respect to any particular election, it is inconsistent with the underlying premises of a responsible, functioning democracy. One of those premises is that a democracy has the capacity—and the duty—to learn from its past mistakes; to discover and confront persisting biases; and by respectful, rationale deliberation to rise above those flaws and injustices. . . . It is demeaning to the democratic process to presume that the voters are not capable of deciding an issue of this sensitivity on decent and rational grounds. The process of public discourse and political debate should not be foreclosed even if there is a risk that during a public campaign there will be those, on both sides, who seek to use racial division and discord to their own political advantage. An informed public can, and must, rise above this. The idea of democracy is that it can, and must, mature. Freedom embraces the right, indeed the duty, to engage in a rational, civic discourse in order to determine how best to form a consensus to shape the destiny of the Nation and its people. These First Amendment dynamics would be disserved if this Court were to say that the question here at issue is beyond the capacity of the voters to debate and then to determine.

Given this passage, perhaps it is not surprisingly that Justice Kennedy does not cite Romer v. Evans - - - which he authored in 1996 - - - in today's plurality opinion in Schuette.  In Romer v. Evans, Kennedy had this to say about Colorado's Amendment 2, which prohibited the enactment of anti-discrimination laws on the basis of sexual orientation:

It is not within our constitutional tradition to enact laws of this sort. Central both to the idea of the rule of law and to our own Constitution's guarantee of equal protection is the principle that government and each of its parts remain open on impartial terms to all who seek its assistance. . . . A law declaring that in general it shall be more difficult for one group of citizens than for all others to seek aid from the government is itself a denial of equal protection of the laws in the most literal sense.

Listed below are links to weblogs that reference Court in Schuette: Michigan Can Ban Affirmative Action: